Are You Looking for a Way In or a Way Out 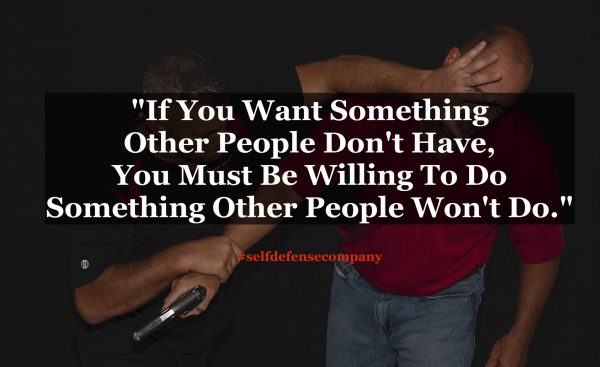 Are You Looking for a Way In or a Way Out

Anyone who starts the conversation with “I can’t” “I don’t” or “I won’t” isn’t ready and the conversation is over.  This is what I tell our instructors because you’re either looking for a way in or a way out.

“Life Is Designed To Tell You NO.”

No – you can’t have success.

No – you can’t learn self defense.

Like the saying goes…if it were easy, everyone would do it.

When you hear those words you’re witnessing a conflict of someone who KNOWS they should do it but are too lazy to actually do it. So they put the reason for the failure on the situation and that makes them feel better. Truth be told, even if you were willing to go to their house and train them for free…they still wouldn’t do it.

Everyone is too busy, too broke, too old, too out of shape — EVERYONE.

Oh and along the way my wife and I lost a baby, I had cancer, lost a fortune (3X over) and had to rebuild my life just as many. Perfect? Far from it.

The struggle is REAL and it’s every day. Many people have come and gone over the last decade and a half…and we’re still rolling.

This is why our conversation ends when I hear those words – “I can’t” “I don’t” or “I won’t”. We’re done because you are not ready. If you were serious…YOU WOULD TRY. It’s really that simple.

Look, if you don’t even try…I mean really try…how the heck are you going to defend yourself against someone who is dangerous, determined and able…?

This isn’t just about self defense, its about everything. Nothing is perfect and nothing goes to plan. Life is always telling you NO and most people accept that answer. That’s why there are “Haves” and “Have Nots”.

But life also gives you clues and a path forward, you just need to pay attention and look at every setback as a step forward. It took Edison 1,000 attempts to invent the lightbulb. Is that 1,000 failures…or 1,000 steps to get it right? It all depends on how you look at it.

You just need to make a decision – This is what I want and I’m going to make it work no matter what.

There will be set backs, there will be failure. Everyone has problems, everyone has challenges…everyone shares the same cloudy sky. Most people accept defeat while a few of us find a way.

So the next time someone says those words, be polite – but end the conversation there…

“Thanks for your time, but you’re not ready. Stay safe.”