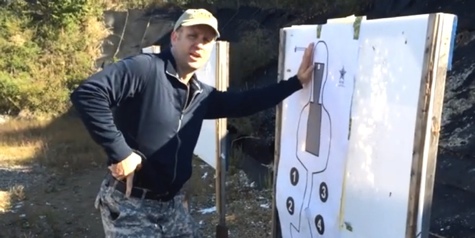 I just watched a tactical firearm training video that really made me shake my head in disbelief.

I can’t believe that so many “expert” firearm instructors are still holding on to old, out-dated gunfighting techniques that could literally get you killed if you ever tried them in a real life-or-death attack.

I won’t mention the instructor’s name out of respect for his embarrassment – and it’s actually not his fault because he’s most likely just teaching the same thing his instructor was taught… and his was taught… and so on.

This passing down of b.s. gunfighting techniques catches nearly every gun-owner at some time which is why this advanced 7-phase “extreme cqc” gunfighting system was developed:

Extreme CQC Shooting
But to make sure you don’t fall into the same trap this instructor did, take a good look at this picture: 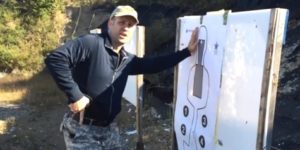 So many instructors out there teach you that, when you’re ambushed, you’ll fend off the bad guy with one hand – maybe with some tricky “flying elbow technique” maybe with a palm heel or whatever – and draw your gun with the other hand so you can shoot him.

The problem is that this doesn’t work… and readers of the Extreme CQC Shooting program know why.

First, unless you’re built like Ahhhnold, your single arm against a violent attacker’s whole body is a math problem that just doesn’t work out for you.

I’ve only seen it “work” when the trainee attacker is a willing participant and not really going for it like a meth-fueled tweaker chomping at your jugular.

Second, if you’re carrying concealed, try battling with one hand and lifting your shirt and drawing with your other hand.

In this Extreme Close Combat Shooting program, they teach you to FIRST neutralize the threat unarmed… and then respond armed.

That’s a LOT different than 95% of the other tactics training out there.

For example, one of the best tactics you can use in an ambush is to quickly thrust both hands up under the attacker’s chin, or to his face.

When you do this – no matter how much bigger your attacker is – it will put him off-balance and disrupt his attack.

Done right, it will even force him to throw his arms out and up, exposing whether he’s carrying a weapon and rendering it temporarily useless as his brain goes from “offense” to “defense” mode.

That’s where you take control of your own survival.

But you must face the fact that your gun is only going to save you if you can get to it and most concealed carry operators don’t pay enough attention to the hand-to-hand skills you must master in order to survive a real attack.