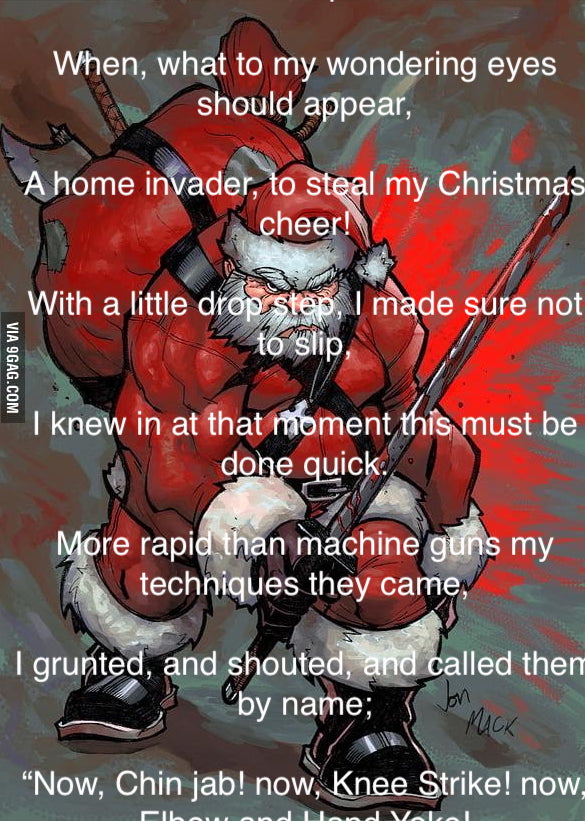 ‘Twas the fight before Christmas, when all through the house

Not a creature was stirring, not even a mouse.

The stockings were hung by the chimney with care,

In hopes that St. Nicholas soon would be there.

The children were nestled all snug in their beds,

While visions of Xbox danced in their heads.

Me in my sweat pants and my wife in her wrap,

Had just settled down for a long winter’s nap.

When down in the living room there arose such a clatter,

I sprang from the bed to see what was the matter.

Away to the noise I flew like a flash,

Picked up my black jack, hid the jewelry and cash.

I ran down the stairs as fast as I could go,

To see someone slip in the window.

When, what to my wondering eyes should appear,

A home invader, to steal my Christmas cheer!

With a little drop step, I made sure not to slip,

I knew in at that moment this must be done quick.

More rapid than machine guns my techniques they came,

I grunted, and shouted, and called them by name;

An Eye Gouge! a Neck Crank! a Head-butt and Rear Choke!

Right down the stairs and into the wall!

I bashed! I smashed! Until he did fall!”

As dry leaves that before the wild hurricane fly,

I hit him so hard, I thought he would die.

So up to the house the cops finally flew,

To pick up this perp (with some new bruises too!)

And then, with gratitude, I heard from the Chief

Thanks for standing up to this Christmas Eve thief.

Then down the stairs my family came with a bound,

Excited to see that Dad’s still around.

The bad guy grumbled, as the cops went to work,

In the back of the cruiser,  we said “good bye” to that jerk,

And I heard him exclaim, as they drove out of sight,

“I wouldn’t have picked that house if I knew he could fight!”