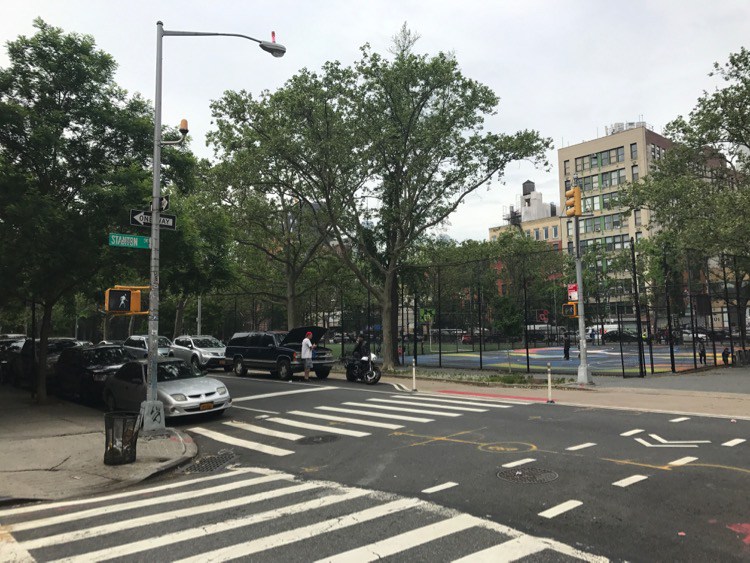 A good Samaritan interrupted a would-be mugger as he pummeled a woman into unconsciousness a block away from her Lower East Side home, officials said Monday.

The 61-year-old victim suffered bleeding on her brain, and needed to be intubated after the Saturday attack, prosecutors said

Police sources said the attacker, Devin Brown, 23, was looming over the victim on Forsyth St. near Stanton St., by Sara D. Roosevelt Park, when a passing motorist noticed her legs sticking out from behind a tree at 6 a.m.

The witness got out of his car and asked Brown what he was doing, and Brown twice yelled out, “She robbed me!”

Except the woman was bleeding from the mouth and unconscious, and he was repeatedly slamming her head into the ground, sources said.

Brown walked off, and the witness called 911, and police caught up with him on Eldridge St., arresting him.

Surveillance video shows him punching the woman and knocking her to the ground, according to a criminal complaint.

He then went through her pocket and kicked and punched her as she lay lifeless, the complaint said.

The woman was taken to Bellevue Hospital, in critical but stable condition.

“That b—h robbed me first!” Devin Brown, who was quickly apprehended thanks to a good Samaritan, whined to cops when he was taken into custody minutes after the Lower East Side attack about 6 a.m. on May 20, according to court papers.

Brown was slapped with an indictment for attempted murder, assault and attempted robbery for the heartless would-be mugging of a woman on Forsyth St.

He pleaded not guilty at his arraignment in Manhattan Supreme Court.