Personal note on hate mail – what you are witnessing is my personal obsession with unreasonable people and every once in a while I can’t help myself and I need to drill down a bit and discover as much as a can about this person. Some people collect stamps, I do this…whatever it is.

Super Lawyer Paul Richmond of Bellingham Washington sent over a dozen emails, and I’m guessing he spent several hours last weekend because he was upset that after spending $27 on 60 Minute Self Defense, he had difficulty logging in and he received one email from an instructor that was a little too sales pitchy.

You Can SEE the whole email exchange HERE:

And the first time customer service heard about his log in issue, we corrected it and Paul was able to get in, no problem.

But that first email really triggered him…in fact, he went as far as to look up The Self Defense Company in his own state…

“I went to our State’s Secretary of State’s Corporations Division and there’s not even an active corporation, so not even licensed for business properly but taking money.” Paul Richmond – Super Lawyer, Bellingham, Washington.

What Paul doesn’t realize is that a business entity doesn’t need to be registered in each state to transact business over the internet. In fact a brief google search would reveal that a company does not need to register in a state unless…

It was on this “fact” that “Paul Richmond – Super Lawyer from Bellingham, Washington” imagined that we were going to face a class action suit.

I ordered the “60 minute self defense” class in part because the offer included access to a much wider library. I immediately experienced login issues and was directed to a customer service email that bounces. At the same time I received emails from my “instructor” telling me if I paid more money I could become an Instructor and trying to sell me on more courses.
Mind you haven’t even been able to log in to the 60 Minute Defense Course.
Not what I expected and I said so.
The sales person (“Trainer”) basically said that the main purpose of their training was sales and if I said I wanted instruction I should expect sales.
The instruction it self was basically “carry pepper spray and have it on your belt so you can reach it.”  As I work and travel in a number of places where I have to go through security and can’t legally carry pepper spray, that’s not much help, and certainly not worth $27.  Most of the rest of the “library” is locked.
Reading complaints including to the better business bureau where people are charged without their knowledge, the owner’s defense is “you checked the box” and to make personal attacks on the person.
Same response I got when I complained about getting no real training and sales emails.
Then I got called out by the head sales person (“trainer”) that because I’m a lawyer I should know that responding to an ad means I give up my rights.
Since they brought it up, that’s not the way the law works.  If there’s deception in the sale, the sale is void and the victim/purchaser gets three times the amount back as well as all attorney fees.
Looks like a class action suit ready to happen.
Or a series of small claims cases – I went to our State’s Secretary of State’s Corporations Division and there’s not even an active corporation, so not even licensed for business properly but taking money.
Takes nerve to tell people they are bound under law to give you payment when you aren’t even a legal entity in their state.

Now to be clear…

We literally spend 3 of the 9 units of 60 Minute Self Defense using Pepper Spray – but it’s a fraction of the actual tactical training. If Paul took the time to post his issue, he would have discovered that ANY small aerosol can replace it. Also, Paul didn’t take the time to look at the AWARE COURSE, that directly deal with travel and moving in public or the other 6 units of 60 Minute SD as well as the 3 bonus lessons.

Now that you read Paul Richmond – Super Lawyer from Bellingham, Washington’s review, I took the liberty of discovering some of his reviews on google HERE <<<

Here are the highlights… 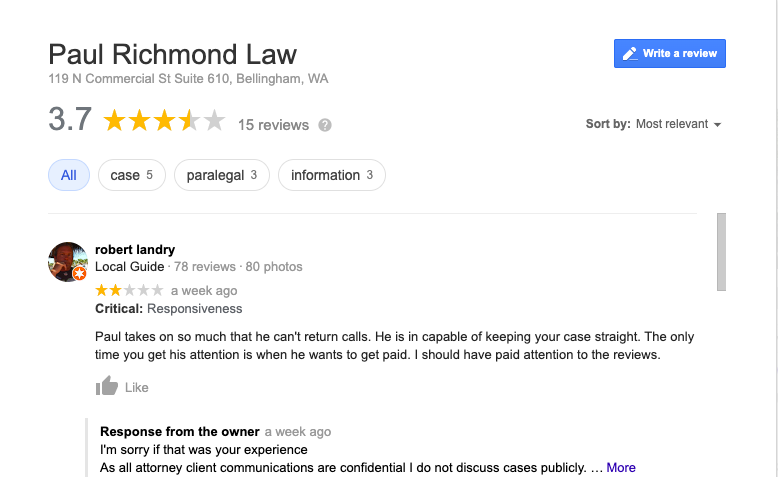 Here’s the thing Paul – we are here to help. The irony is this: you clearly have some customer service issues with your legal business, and when you experience a log in issue and an email that you don’t like the tone of you immediately LASH OUT and threaten.

You would think you would have a level of understanding that would be higher than your average person…but you don’t, in fact you’re way worse…which speaks volumes to about your character.

I hope you find peace some day – but that doesn’t mean I’m going to sit back and let you disparage my company and it’s instructors..not on my watch.