History of Self Defense Part 2: W.E. Fairbairn and World War 2 and Defendu

History of Self Defense Part 2: W.E. Fairbairn and World War 2 and Defendu

People You Should Know:

W.E. Fairbairn, The Father of Hand to Hand Combat

William Ewart Fairbairn (/ˈfɛrbɛrn/; 28 February 1885 – 20 June 1960) was a British soldier and police officer. He developed hand-to-hand combat methods for the Shanghai Police during the interwar period, as well as for the allied special forces during World War II. He created his own fighting system known as Defendu. Notably, this included innovative pistol shooting techniques and the development of the Fairbairn-Sykes Fighting Knife.

The television series Secrets of War suggested him as a possible inspiration for Q branch in James Bond.

Fairbairn served with the Royal Marine Light Infantry starting in 1901, at just age 16. Fairbairn was stationed in Japanese-occupied Korea from 1903 to 1907. During this time he was on the “Bayonet Demonstration Team”. He had always had a fascination with close quarters fighting and spent time learning western boxing. and was regarded as a “good man in a dust-up.”

After his tour in Korea, Fairbairn joined the Shanghai Municipal Police (SMP) in 1907. During his service with the International Police in Shanghai, Fairbairn reportedly engaged in dozens of street fights in the course of his duties over a twenty-year career, where he organized and headed a special anti-riot squad. Much of his body, arms, legs, torso, even the palms of his hands, was covered with scars from knife wounds from those fights.

In the early 20th century, the British-controlled Chinese municipality of Shanghai was one of the toughest beats any cop in the world could possibly pull. An almost-lawless, dangerous city that served as a haven for gangsters and criminals from across Asia (not to mention the opportunistic Europeans who routinely passed through on their quests to screw over every person they could possibly find).

The mean streets of Shanghai were almost completely overrun by heavily-armed, deadly organized crime syndicates, separatist rebel groups, pimps, drug dealers, kidnappers, and all other sundry manner of characters who are just as likely to shank your face with a pork sword then cap you in the brain as they are to ask you if they could bum a light off you.

All that stood between an almost endless army of gangsters, revolutionaries, criminals and other violent anti-authority types were a few hundred overworked, underpaid, unappreciated Chinese, Sikh, and British police officers of the SMP who spent roughly as much time avoiding bullets as they did filling out paperwork.

One evening while on patrol he got into a “scuffle” with members of the notorious Green Gang. He was stabbed a dozen and left for dead, bleeding out in a dark alleyway in the back streets of Shanghai.

But William Fairbairn didn’t die, he got trained.

Immediately upon his recovery he went into a small store front he passed dozens of times while on patrol. The sign outside simple read “Professor Okada – Jujutsu, Bone Setter.” But training didn’t stop there…Fairbairn studied boxing, wrestling, savate, Shin no Shin do ryu jujutsu (Yoshin ryu), Kodokan judo in which he earned a 2nd degree black belt, and then a variety of Chinese martial arts as well as Indonesian. Because Shanghai was an economic center and port of call, Fairbairn had access to various bodyguard details from around the globe.

He could test these methods in the mean streets of Shanghai and the criteria was simple – if it worked and could be taught in a short amount of time – it was incorporated into the training program. If it was considered sport, ceremony or just ineffective it was eliminated.

Fairbairn’s reputation grew and was Great Britain’s Dirt Little Secret. He quickly began training instructors who, in order to qualify, needed to have 24 documented use of force situations under their belt.

He developed his own fighting system called “Defendu” and taught it to members of that police force in order to reduce officer fatalities. He described this system as primarily based on his personal experience, which according to police records included some 600 non-training fights, by his retirement at age 55 from the position of Assistant Commissioner in 1940.

In 1951, he went to Cyprus to train police and in 1952 (and 1956) Fairbairn provided training to the Singapore Police Force’s Riot Squad unit, which is now the Police Tactical Unit.

Basically speaking, Defendu (referred to by Fairbairn as “Gutter Fighting”) was the predecessor of The Self Defense Training System.

The principle is simple – kick the sh!t out of this guy as quickly as possible, cripple and/or otherwise incapacitate him, then slap the cuffs on him. Nothing is off limits – boots, knees, elbows… there was an entire section on biting and eye-gouging. The rule was simple – survive at all costs.

Fairbairn’s experience and training evolved into the development of strike teams designed to take down rooms with overwhelming force and tactical superiority. In 1925, when riots broke out across Shanghai, Fairbairn’s Riot Police Squad, used these tactics to contain rioting and limit looting while minimizing civilian injuries. These tactics are still used today.

Fairbairn’s job changed dramatically as things inched closer to World War II in 1937.  After the Japanese Empire attacked and overran almost all of China, Shanghai was the only place on mainland China not currently occupied by the rampaging Japanese Army. In addition to dealing with a huge influx of refugees that almost doubled the population of the city, Fairbairn’s cops also had to deal with breaking up raging street fights between Japanese troops and Chinese citizens, stopping a Communist uprising in the city, and otherwise keeping the peace in the middle of a war zone.

The 55-year old Fairbairn was called out of service in 1940, when he resigned his post with the Shanghai P.D. and took a job working with British Secret Service as an Army officer, where he was given the nickname “Dangerous Dan” to help British Forces fight the Nazi War Machine. Together with fellow close-combat instructor Eric Sykes, he trained British, American and Canadian Commando and No. 2 Dutch Troop 10th Inter-Allied Commando forces, along with Ranger candidates in close-combat, pistol-shooting and knife-fighting techniques.

Fairbairn’s trainign was so effective that there was allegedly a six-week “Silent Killing” course that, in addition to other things, included a section on how to kill a sentry with an ordinary stick (SDTS COMBATIVES MODULE 9).

Fairbairn emphasised the necessity of forgetting any idea of gentlemanly conduct or fighting fair: “Get tough, get down in 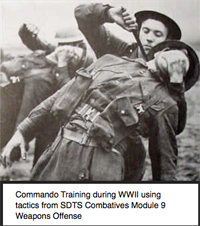 the gutter, win at all costs… I teach what is called ‘Gutter Fighting.’ There’s no fair play, no rules except one: kill or be killed,” he declared.[1]:p:192 One of his pupils was Raymond Westerling, who fought behind enemy lines in Burma and Indonesia.

For his achievements in training OSS personnel, Fairbairn eventually rose to the rank of Lieutenant-Colonel by the end of the war, and received the U.S. Legion of Merit(Officer grade) at the specific request of OSS-founder “Wild Bill” Donovan.

He died peacefully in his home in 1960 at the age of 75. He had never drank, swore, or bragged about his near-limitless fighting abilities once in his life. (I tried to avoid swearing in this article out of respect, but I think I lasted about one paragraph.)