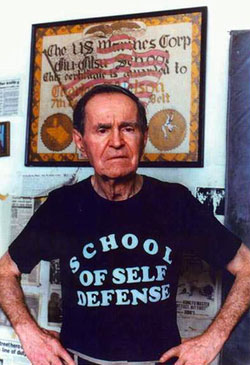 People you Should Know: Charlie Nelson

When you think of New York City, do you think of the Statue of Liberty or maybe even the colorful people that live there? That’s okay if you’re looking at NYC from the outside, but a different perspective arises if you’re on the inside. That perspective is surviving on the streets and no one knows that better than Charles Nelson.

Charlie Nelson taught self-defense to New Yorkers since 1946 and, he passed in 2003 at 88 years old.

He was a man who has dedicated his life to helping ordinary citizens defend themselves against would-be muggers and attackers. His methods are unique and his style unorthodox, but his system, which took him a lifetime to perfect, works and works well.

Charlie began his training as a child in an orphanage, where he picked up boxing at an early age. Along with the boxing, he was taught jiu-jitsu by a marine who was returning to civilian life after serving in China. Fascinated with this new style of fighting, Charlie became of age and joined the only Marine Corp outfit that was teaching hand-to-hand combat at the time.

Charlie’s first introduction to hand-to-hand combat in the Marine Corp came from training with the famed Lt. Col. A.J. Drexel Biddle. The late Col. Biddle’s book Do or Die, A Supplementary Manual on Individual Combat, is still in print since 1937.

Another famous training partner of Charlie’s was John Styers, his bunkmate at Quantico. The late John Styers book, Cold Steel: Techniques of Close Combat, is also still in print since 1952.

The Marine’s primary combat duty was to fight the Japanese in the Pacific Theatre of War. The Japanese were the most formidable combat troop that the Marine Corp ever had to face in battle. Japanese soldiers had the reputation of being invincible in hand-to-hand battle, due to their knowledge of jiu-jitsu, judo, and karate. The Marines needed a fighting method that could defeat these feared Japanese martial arts.

They found such a method taught by a combat expert named Dermot “Pat” O’Neill. Mr. O’Neill, formerly a detective with the Shanghai International Police, taught police officers to defend themselves against Asian criminals who used their martial arts skill to evade arrest. The method he taught to the Marines was termed “Defendu”, to defend against Judo. Thus many Marine Corp hand-to-hand combat instructors were taught this scientific method of self-defense.

Charlie’s most personally important instructor, a Sergeant in the Marine Corp named Kelly, taught Charlie these skills. The late Sgt. Kelly was detailed to the US Marine Corp detachment in Shanghai China, a unit known as the “China Marines”. Sgt. Kelly assisted Dermot O’Neill as the self-defense instructor to the Marines in China. Sgt. Kelly also studied under Capt. W.E. Fairbairn and Capt. E.A. Sykes. These new fighting techniques were sorely needed and were soon put to the test. As anyone can see, Charlie trained with the giants of WWII-era hand-to-hand combat. In turn, during his more than 10 years as a USMC instructor, Charlie taught these skills to countless other Marines.

While in the Marine Corp, Charlie would often hear through the grapevine about soldiers who were excellent wrestlers, boxers, or street fighters. He would hunt around the base in search of these fighters he heard so much about, until finally tracking them down. They would teach Charlie many of the finer points of fighting. Charlie gained valuable knowledge from the months that he trained together with them.

After leaving the Marine Corp in 1946, Nelson opened the School of Self-Defense in Manhattan. He taught his students the art of hand-to-hand combat, the same fighting method he had instructed marines for 10 years and refined over time. The types of students attending his school at the time included bouncers, longshoremen, and assorted roughnecks.

Charlie settled in and began examining other fighting systems. He began practicing Kung Fu with a Chinese emigrant in the back of the man’s Chinese hand laundry store. After learning as much as he could, he moved on to train with college wrestlers, Judo players, and other fighters.

By combining all the fighting techniques he learned over the years, Charlie developed his own brand of self-defense. He first began teaching this fighting style, which he termed “Chinese Mongolian Wrestling”, to interested businessmen as a hobby.

When he wasn’t teaching the businessmen, he was teaching at the famed New York Judo Academy, where he kept the upper hand on the other judo black belts because of his knowledge of this Chinese Mongolian Wrestling. The Philosophy underlying Charlie’s techniques, which combine the grappling skills of Chinese Mongolian Wrestling with the brutal efficiency of Defendu, is deceptively simple but realistic.

One principle, in Charlie’s own words, is “never take a fighting stance, pretend to yield.” Another is that you “never go to the ground on purpose, like in judo, but you tie up your opponent with arm locks or clinches. In the real world you get killed by a second assailant by going to the ground.”

Yet another is to “evade your opponent’s attack, escape his hold, then immediately counter-attack-with crippling strikes,” a concept Charlie refers to as the “Mongoose and the Cobra.”

The closest way to describe Mongolian wrestling, Nelson explains, is stand-up grappling. An element that he demonstrates to all of his entering students is that when the assailant attacks you, you escape his hold and attack him back.

“Another important aspect of the Chinese Mongolian Wrestling,” Charlie stated, “is that there are only two ways of defending yourself counter-attack or attack. In the counterattack the defender pretends to yield, only to trap the assailant and set up a counter-attack.”

When Charlie formally opened his Self Defense School and started teaching full time, he quit the New York Judo Academy. He helped Korean emigrants get a start by letting them teach Korean Karate and Tae Kwon Do at his school during the evening hours. Charlie also studied these techniques, working out counters and evasion moves to these various attacks.

The door to Charlie’s school has always been open to anyone who wandered in off the street. He can teach anyone to defend his or her self as long as they want to learn. Charlie’s School of Self-Defense was possible the first martial arts school in the United States. It is definitely the first martial arts school solely dedicated to the teaching of simple, effective self-defense skills.

Charley has undoubtedly taught self-defense to more people over the years than any man alive.

Charlie’s system has never been fully or systematically codified in books or on tapes. He states that only his longterm students hold the true secrets of Mongolian Wrestling. This policy follows the martial arts tradition of handing down the art to truly deserving students and making sure that dangerous techniques are not taught to anti-social individuals. Charlie has a standard fifteen-lesson course. Charlie has boiled down his system to the smallest number of techniques and moves; in this way the student does not have an extraordinary amount of techniques to learn. Charlie’s philosophy is the simpler the better.

Charlie’s genius is this: Charlie has studied, over a lifetime, the typical fighting habits of the average American street fighter and mugger. He has developed a system of techniques that address the way a person would be attacked by an assailant. These techniques are interchangeable. A small number of principles to burn into muscle memory can carry the practitioner of “Chinese Mongolian Wrestling” through just about any violent conflict.

In teaching his system, Charlie follows sort of an oral tradition. Every one of his techniques comes with a story. He will relate how someone attacked him or one of his students, and then demonstrated in detail the attack and counter-attack. These stories put the techniques in context and make them easy to remember.

Charlie has been going strong for many years. He has taught men and women from all walks of life, from everyday citizens to police officers to well known martial artists, the latter remaining nameless by virtue of a mutual agreement with Charlie. He has taught famous individuals, including Donna Reed, Lou Reed, Robert Duvall, and Billy Squire. Everyone who has ever trained with him develops a greater understanding of the art of self-defense and the confidence to perform these skills on the street. The students owe all this valuable knowledge to the man who has dedicated his life to defending against the evil element of society.

He has generously shared his life work with those who have been fortunate enough to have trained with him. He has been nicknamed the “Last American Master” and “Little Bigman”, and his “No Touch System” evade the attack and strike method, rooted in Chinese Mongolian Wrestling will remain as the ultimate martial arts maneuver and the back-bone of The Charles Nelson Concept of Self Defense.