How to Fight Drunk 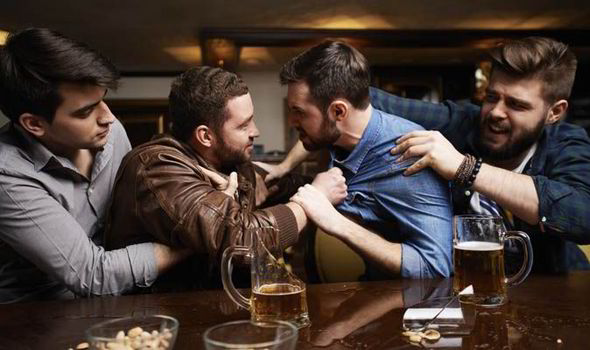 How to Fight Drunk

There’s kind of a “don’t ask-don’t tell” policy in martial arts when it comes to drinking. Everyone assumes that you’ll be completely sober when you have to defend yourself and we all know the opposite is true.

People drink and when people are drunk they have a tendency to beat the crap out of each other. Drinking lowers your inhibitions, impairs your judgment and cripples your motor skills and before you know it, you’re dancing with a house plant.

If you have chosen a path of sobriety, then you don’t need to think about this, but for the rest of us who occasionally like to have a few, keep reading, but read fast, I don’t want you to pass out before the end of the article.

If you’re going to drink and you’re serious about self defense, you better know how drinking affects your performance.

Alcohol affects your judgement and coordination because impairs your body’s ability to get oxygen to your muscles and vital organs..including your brain. In reality these effects happen faster and are far more debilitating than you think. This is mainly due to your lack of judgement.

Your new found bravery is replacing your real ability to actually fight. As your willingness to fight increases, your ability to fight decreases.

I first noticed this when I was younger and a few of us were drinking in my buddy’s home gym. We decided it would be a good idea to go on the bench and try for a new max – testosterone, alcohol with a dash of barbell – it’s a wonder no one died.

Needless to say, I didn’t hit my max, but I did learn a valuable lesson – while you may FEEL like you can take on the world – the world can come back to kick you in the a$$.

Since everyone has a different tolerance level, to help you determine yours I present the following drill…

I’m no scientist (but I did stay in a Holiday Inn Express last night) however I did put together a drill to help you determine how many drinks it takes to render you useless.

Note: this is best to do with a friend or seven.

Do another round of the same circuit.

Repeat until you need to stop and catch your breath during a 30 second burst.

After your threshold is reached, it’s a steep decline (trust me on that one).

The record is 8 shots of bourbon.

Now I’m not telling you to film your attempt and put it on Youtube, that would be irresponsible….

You need to train for where and how you live.

That’s why it’s important to train at home doing the things you normally do.  When you go to a place to practice, you get into a self defense mindset and that’s not reality. We see this with cops and soldiers often.

The uniform goes on, the game face comes out but as soon as they’re off duty, they get caught off guard like everyone else. In order to practice “flipping the self defense switch” you need to practice in places where you’re most likely to be attacked, where you work, live and play.

How far can you take this?

I’ve set up a strobe light, smoke machine and lights to simulate a club atmosphere. Be careful the strobe REALLY messes with your depth perception (note: wear face protection).

We’ve done car jacking simulations, parking lot scenarios and anyplace else you can think of, just get out of the gym.