How Long Does it Take to Learn Self Defense?

How Long Does it Take to Learn Self Defense?

I posted this question and it wasn’t long before the ‘experts’ chimed in – months, weeks, a year…10 YEARS!!!

Not surprising because after decades in the martial arts whose business thrives on you spending more time and more money – no wonder they tell you that you need YEARS of training.

Fact is, each year about 5 million people are victims of violent crime and the vast majority of them survive without any training at all. REPORT HERE

That’s because as a species you have a built in survival instinct to FIGHT, SURVIVE and PROTECT.

After all the fancy moves, belts and trophies, the purpose of self defense is simply SELF PRESERVATION and every living being on the planet, from an ameba to your Uncle Joe has the instinct to survive.

So I’m going to give you a 5 second self defense lesson that your can use RIGHT NOW and it taps right into your survival instinct.

This requires NO real training at all and 99% of the people on the planet can do it…some of us even do it EVERY DAY.

If you are faced with a threat, any threat…RUN.

Yes, even if someone is pointing a gun at you.

Did you know that in cases where a firearm was used to commit a crime, only %7 of those people were actually injured by the firearm. REPORT HERE.

So just running increases your chances of survival by 93%!!!

Now I’m guessing that number is actually HIGHER because hitting a moving target under stress isn’t easy. And as that space increases, the chances of your getting shot decreases.

If theres a technique to running, I would say RUN AT AN ANGLE. Because now the shooter needs to adjust for both distance and position, which is a lot harder. (DO NOT SERPENTINE SHELLY)

Take a look at the pic below, pretend white shirt has a gun pointed at pink shirt. 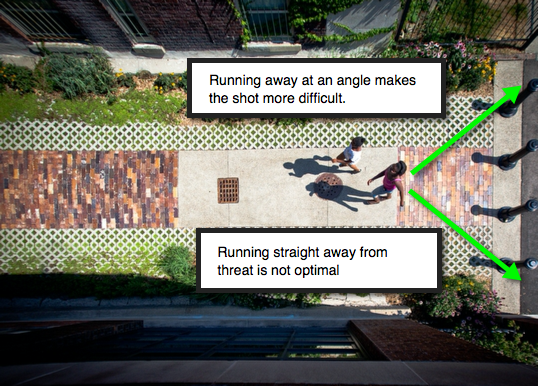 The better path is the top arrow because it takes you out of the line of fire faster and forces the shooter to adjust their angle. Don’t over think it, just do it.

Running solves a lot of problems for a lot of people. Check your ego at the door, get home to your family.

Remember this, in order for someone to impose their will on you, they need to get close to you.

So the better you can mange your spacial relationship with others, the less likely someone will choose you as a target. The more space you create, the greater your chances of not getting picked.

Look at that – you learned how to defend yourself and you didn’t need a “free uniform”.

How to practice your new skill.

Whenever you’re talking and walking, stay far enough away from others so that if they have to touch you they would need to shift their weight and take a step.

This increases something your ‘reactionary gap’ and it will enable you to evade an attack easier.

In the SDTS you learn how to avoid places of ambush and expand this tactic to improve how you interact with your environment. Something as simple as this will actually cause a potential attacker to pick someone else.

Unless of course you have a stack of hundreds and a rolex, then they might be willing to take a greater risk.

Thanks for stopping by and as always…

PS. Of course there are times you can’t just run away…but you knew that already.