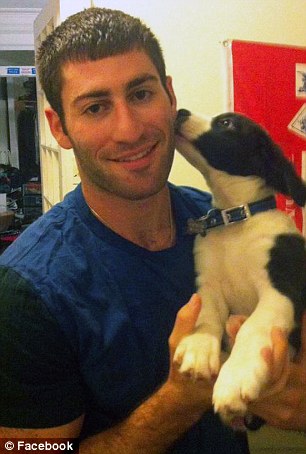 The Good Samaritan, Peter Gold, was committing an extremely ‘selfless act’ when he intervened after he saw the suspect dragging the woman toward an SUV, New Orleans’ police chief said.

Gold saw what was happening and stopped his car, at which point the suspect demanded money then ‘became enraged’ and shot Gold in the gut after the victim told the gunman he had no cash.

Chief Harrison said: ‘There’s no greater selfless act than to stop and help someone perhaps who you don’t know, for reasons you don’t know.’

He also had a message for the suspect.

‘Let me make that clear you can’t hide and run. We are going to catch you,’ Chief Harrison said.

While Gold was on the ground cradling his wound, the suspect stood over him and attempted to shoot him again in the head but the ‘large automatic firearm’ he was using jammed and didn’t fire.

The suspect, described as a black male wearing a dark colored hooded sweatshirt, took the unnamed woman’s purse and fled from the scene in the SUV.

Gold, a fourth-year student, was taken to the hospital and remains in ‘guarded’ condition.

He expected to make a full recovery from his wounds.

The woman was treated for minor injuries and released.

Euric Cain, the man indicted in the shooting of Tulane medical student Peter Gold, was accused Wednesday (Dec. 9) of kidnapping and raping a couple that police said he carjacked less than 24 hours after shooting Gold.

Now NOPD investigators say video and DNA evidence links Cain to the couple’s kidnapping and rape less the day after the shooting.

The victims in the two incidents are not connected other than by Cain being accused in the crimes.

In Gold’s shooting, prosecutors said Cain was the man captured on video surveillance robbing and attempting to kidnap a woman around 4 a.m. Nov. 20 in the Lower Garden District. New Orleans police said Gold, 25, attempted to intervene in the crime and was shot in the stomach by Cain.

Cain has pleaded not guilty to the shooting. NOPD investigators said Cain is the man seen on a chilling video sequence shooting Gold in the midsection and then attempting three times to shoot Gold in the head, only to have his gun jam.