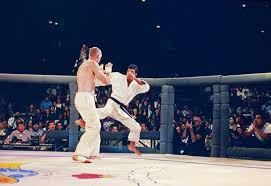 Martial artists around the world stood in shock as they watched experts in many styles shatter their hands and feet using what they would assume to be “knock outs” in the dojo.

I’m sure every competitor entering those early UFC contests thought they were a killing machine.

The UFC revealed what few of us already knew:
Traditional Martial Arts was a House of Cards waiting to be knocked down by a gentle breeze.

And grappling had nothing to do with it.

After all a punch is a punch and a kick is a kick – it doesn’t matter if it’s in the street or the octagon. If you practice striking for self defense it better work!

But almost down to the man, the hands and feet were seriously damaged using striking techniques in a bare knuckle situation.

Truth be told, the failure of those courageous martial artists was NOT their fault.

Their martial arts FAILED them.

They have become pretend fighting with choreographed self defense.

The old bare knuckle fighting techniques and how to train them are all but gone. Pine boards, x-ray paper and demo-tricks do not replace the bone on a live human being.

After decades of watering down their systems to build their businesses, martial arts are nothing more than a game of tag played by PAPER TIGERS.

Still to this day, nothing has really changed in the traditional martial arts world. Sparring and forms competition STILL DRIVE THE TRAINING.

“Traditional” martial arts remain nothing more than puffed up versions of something that may or may not have existed long ago.

From Bruce Lee’s one inch punch to George Dillman’s DEATH TOUCH, these magic tricks are useless outside the demo and don’t work on a “non-believer”.

Yet that doesn’t stop the martial artists who are so heavily invested in their arts and their businesses that they still sip the Kool-Aide, continue to DIG IN and defend their systems convinced they’re teaching a DEADLY ART and that every shot is “Ikken Hissatsu” (Kill with one Strike).

All the while nothing has changed since UFC 1 because they still practice the same way.

They claim their techniques are illegal and too dangerous for the UFC – but they practice those techniques FAR LESS than the punches and kicks that we already know will fail them in the street.

The problem is strikes delivered in real fighting are different than sparring.

In point fighting and kick boxing, strikes are meant to score points. In full contact fights you use your strikes to wear your opponent down over time, get him tired and create openings.

While in the street you need to explode into your target and destroy it as fast as you can like in the SDTS Program.

Modern striking is built around the boxing glove and hand wrap. Using western boxing methods like all UFC and martial arts do, you will break your hands without protection.

However there are many other ways of striking that take advantage of the hands strengths. For example, in the SDTS Program the first strikes you learn use the edge of hand and the heel of hand because those parts of your hand can take a lot of abuse and not get damaged.

I realize that many martial artists may know some of these techniques but very, very few know how to train them to make them effective in the street. Hitting the air and practicing them in a form is NOT the way to do it.

Lastly sport punching will not give you the REAL penetrating power needed for the street. The only way to achieve this is a combination hand conditioning and practicing your combinations with 100% power on a target that resembles the human body.

You need to practice FULL FORCE without any hand protection. After all, you don’t walk around with gloves and hand wraps all day…

For the most part, YES.

What you’re learning and how you’re practicing doesn’t work outside the dojo. Pretending to be a “modern-day samurai” is literally the same as participating in civil war re-enactments.

Only the people in the civil war reenactments aren’t delusional thinking they’re learning something with which they can protect their families.

My judo instructor, the late Yoshisada Yonezuka said it best when referring to old school (Ko-ryu) Jujustu he said: “Jujutsu is dead.”