Self Defense for People with Disabilities 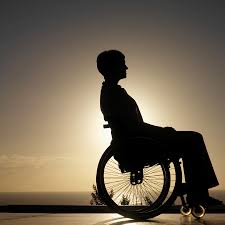 Self Defense for People with Disabilities

The Truth about Self Defense for People with Disabilities.

Unable to walk, let alone fight, this is the true story of how Kevin Jones adapted his physical limitations to defend himself.

Three years ago I discovered The Self Defense Training System (SDTS) and I immediately recognized it’s rightness of the philosophy. Back then I was fit and active. I found the SDTS after I almost kidnapped in Saudi Arabia.

At first I went through the SDTS Modules one step at a time. Since it was easy to follow and made an incredible amount of sense, it was a fast learning process. I quickly felt confident that THIS was exactly what I was looking for….then a year later everything changed when I was diagnosed with prostate cancer.

The Harsh Reality of Disabilities.

During the cancer staging process, bone tumors were discovered in two thirds of my left femur. As a result I had to have two surgeries. One surgery for the cancer and another surgery to drive a femoral nail, or metal rod, through the bone marrow canal of my left thigh bone.

I had these surgeries only 3 days apart, so I was pretty much laid up.

In a  just few short months, I went from strong man and world traveler to invalid , unable to walk.

But wait…IT GETS WORSE!!!

The bone tumors spread into both hands which makes it painful to grasp anything. And if the metal rod wasn’t enough… the tumors even spread to my feet, which makes it even more difficult to walk.

I live just outside of New York City and the nightly news is full of attacks on the physically disadvantaged and elderly people and all at once that was me!!!

As luck would have it…THIS is the time I was attacked.

A week later I drove to the mall and was attacked by a mugger in the parking garage. I was SHOCKED at how well the SDTS took over. I was able to DESTROY my attacker. Regardless of how I felt….the SDTS worked.

This is how I discovered that SDTS is wonderfully adaptable.

I was able to use the SDTS in spite of my mobility issues. I can still do all of the basic strikes without problem, and most of the advanced stuff as well. Even in my current condition, the SDTS still allows me to hit with conviction.

I have to be careful with kicks because I could literally break my own leg, but in a life or death situation I’ll do what’s necessary and besides – I DON’T HAVE TO KICK with the SDTS!

In addition, the SDTS Edged Weapons training is still very effective. I carry a push dagger because it requires less grip strength…but that’s not the only hidden gem in the SDTS…

The SDTS showed me how to REALLY use my cane for self defense.

This symbol of weakness has become my FAVORITE weapon. It’s always in my hand so I don’t have to fumble to get it out of a pocket or a sheath. It gives me added reach and the SDTS techniques multiply my power.

I purchased a hickory “combat” cane and I like it A LOT. It’s very hard and about the same weight of an ax handle. The drills from SDTS Module 9 work perfectly with the cane and it’s truly an excellent weapon.

However, be warned….not all cane fighting experts are created equal.

My cane came with a DVD of self defense drills from another company I will not name.  I was horrified to see 70 year-old ladies being taught to block a punch with a one handed grip.

They were even told to ‘twirl’ the cane around to scare off the attackers….Wow, I literally have no words.  There’s no way you will be quick enough to block a punch with a cane, and twirling it simply alerts your opponent that you intend to hit him. He’ll simply change his tactics or ramp up his attack and then you have a whole new set of problems.

Make no mistake…The SDTS showed me how to fight with my cane…not the cane “experts”.

I know you probably don’t think of the SDTS as a cane fighting system or something for the disabled…but trust me…it is.

The Self Defense Training System continues to be part of my daily life, even more now with my disability.  It’s adaptable to your current condition and abilities and almost anyone can use it.

Simply take the first step and it all falls into place.

I’ll always be grateful for what the SDTS has done for me.

Start the Self Defense Training System for $1