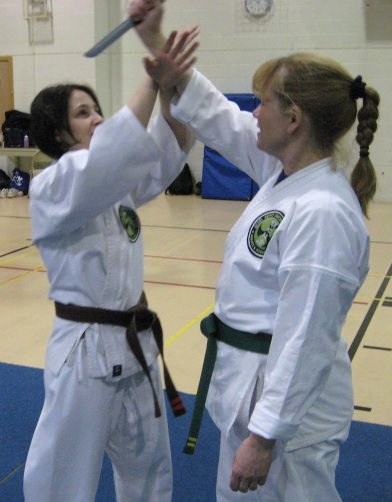 I get a lot of people asking my opinion about other self defense programs and to be honest – there’s SO MUCH stuff out there both good and bad and I’m only one guy so it’s impossible to review and watch every new thing that pops up.

You should also determine the difference between a SYSTEM and a CONCEPT.

A system is a methodical approach to based on core principles where the TECHNIQUES COME SECOND.

A concept is a technique based on a principle – the TECHNIQUE COMES FIRST.

A system can have several concepts – however, a concept does not make up a system.

Most of what you see new today are concepts presented as systems and concepts DO NOT a system make.

I also have a confession to make…because I know what works and I’ve already spent years doing the research, there’s absolutely NO NEED for me to look any further. Because of the SDTS, I’ve checked that box and moved on.

The truth is, for over 200,000 years homo sapiens have existed on this planet and even before then, man has been trying to figure out how best to kill his fellow man. Ever since Cain killed Abel, technology may change, but MAN ON MAN VIOLENCE has remained the same.

All the research has all been done by many men and women from many countries and governments and at the end of the day there’s only what works and what doesn’t work.

It doesn’t matter where your self defense “comes from” – whether it’s endorsed by the MUSSAD or SEAL TEAM SIX – once you cut through the marketing and the hype, there are really only three things you care about:

Forget trying to be the “best” there’s literally no such thing. You’re never going to be the TOUGHEST person on the planet – but the good news is you don’t have to be.

An assault is not a title fight. It’s one person trying to impose their will over another  based on a simple RISK-BENEFIT analysis.

In most cases when you resist, there will come a point when your attacker feels it’s just not worth it and break contact.

Because of that, you can protect yourself with a high degree of efficiency and success that will enable you to survive. Literally millions of people do it every year with little or no training at all. So the idea that you need to spend years learning this is preposterous.

After all, self defense is an instinct of every living creature on the planet, so it shouldn’t be that complicated.

To help you determine whether or not a self defense is any good, we’ve created 12 simple criteria to help you.

There are  universal truths to self defense and the number one is that it takes MORE WILL THAN SKILL. Real self defense should maximize your SNS activation and enable you to fight to your full potential.

MORE on the SNS…

We talked a little bit about the SNS and what happens to you when the FIT HITS THE SHAN – below is a little more detail on the subject.

This is what happens when your SNS activates.

The chart below briefly describes what happens to you physically and mentally  when you’re attacked and your SNS kicks in. This is when you TRULY BELIEVE your life is in danger. It is  impossible to replicate this in training…though some have come very close.

If you went running and got your heart rate up to 180 beats per minute you would be tired for sure, and you would feel some of these effects, but not all of them and not in the same way.

Hormone induced heart rate comes on FAST and effects every facet of your being. 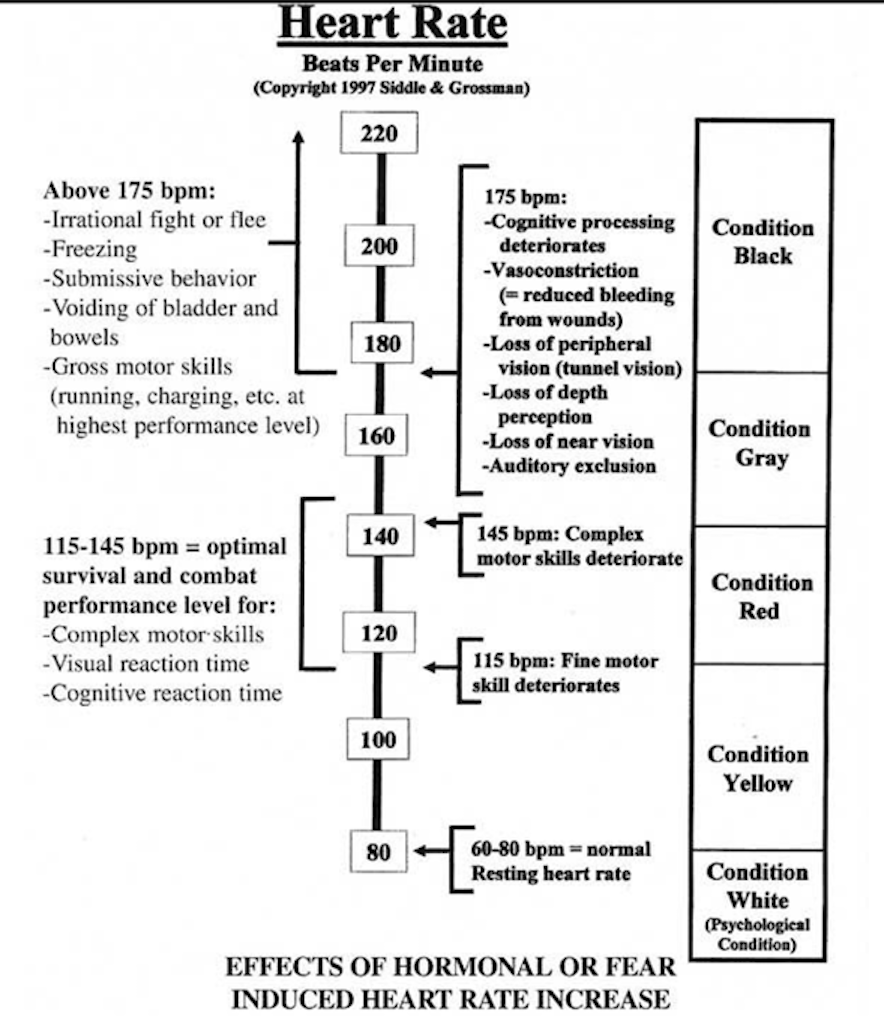 There are five conditions.

Condition Yellow is FEAR, you start to become hyper aware and the SNS is activated.

Condition Red is where you start to get into trouble. Your complex motor skills deteriorate as well as cognitive thought.

Condition Gray you’re off the grid.  You experience tunnel vision and auditory exclusion (can’t hear anything). You can only RUN or CRAWL.

Condition Black is “lights out”. People who enter this state literally black out.

This is your body’s battle mode so you need to train in methods that take advantage of it. This means sticking to “complex motor skills”.

What are Complex Motor Skills?

There are 3 types of motor skills: Gross, Complex and Fine.

Fine Motor Skills – are the coordination of small muscles, in movements—usually involving the synchronization of wrists, hands and fingers with the eyes. You will find that most “self defenses” in martial arts involve these types of skills.

What is increased reaction time?

The positive impact stimulatory neurotransmitters have on reaction time. The increased arousal naturally boosted by adrenaline. You can also improve your reaction time by training yourself to react to things that move faster like swinging targets. This allows you to fight HARDER and FASTER.

What is faster cognitive reaction time?

Limited choices to a multitude of situations.

Focus on COMMON DENOMINATOR self defense – If it works for the SMALLEST and WEAKEST it will work for the BIGGEST and STRONGEST.

I would like to claim 100% credit for these insights but I’m not that smart and I’m only one person. All of this research has been done, applied and vetted for over 100 years by people who’s vocation was violence. They weren’t trying to perfect an art or promote a system like I am, they just wanted to survive.

I guess it upsets a lot of people that I say self defense isn’t that complicated. Well like I said before, anything that is an instinct to every living creature on the planet, shouldn’t be complicated.