The “Secret” to the SDTS – The Drop Step 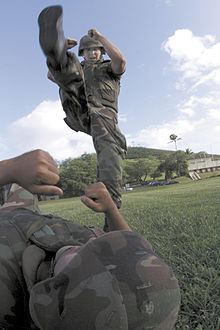 The “Secret” to the SDTS – The Drop Step

People often ask what makes The Self Defense Training System different than all others and there is only one place to start – The Drop Step.

In fact, I’ve been doing this for decades and if it wasn’t for my recent conversation with Elite Member Sean Duffy, I wouldn’t have had this epiphany.

The following is the incredible insight  by  Sean posted in the forum after discovering an old post from Paul P:

Ok, so I found this discussion of it in another thread. I think this makes a lot of sense. I think it also answers my question, in that I’m over thinking it. The move [Drop Step] itself is pretty instinctive. Thinking about it trips me up. Also, the idea of drop stepping BOB around for 5 miles is a great idea.

You know, my favorite part of the whole SDTS “system” is still, and will always be, the drop step.

When I first saw that described, a light went on, because it was something I already understood instinctively, but seeing it described made it a conscious realization.

It is also the real “secret” behind SDTS.

It also makes the debate of hand position irrelevant.

Why is the drop step the most important thing?

Well, first, in a high stress, violent situation, if you don’t run away, your instinctive response will be to close distance with your opponent. This is why, for example, guys end up wrestling on the ground, a lot of times.

In such a situation, you instinctively realize that to maximize the probability of damage to your opponent, you need to be as close to him as possible, for greatest leverage, and to displace his center of gravity with your own. [SDTS Forward Drive]

Movie fights, or sport fights, at distance aren’t going to happen in life or death situations.

Very much like sex. You want to be on them hardcore, as soon as possible. You can’t do a whole lot of meaningful damage from a distance. <<< IMPORTANT

The drop step just naturally flows right along with this instinct.

Second, I would say that when you violently close distance as soon as possible, you will jam and neutralize your opponent’s attacks, even if he’s already in the process of throwing a punch, kick, whatever. <<<REALLY IMPORTANT

In other words, if a guy begins to throw a punch, and you simply immediately run into his ass, his punch is useless. BINGO!

So, for example, the idea of a “flinch” response is useful if surprised, but you can also “flinch” by stepping INTO whatever is coming at you. If a weapon is involved, then the flinch merely involves a minor deflection enroute to the opponent.

But, the drop step IS the flinch. It IS the most important thing.

Thirdly, the drop step is most important, because it delivers to the opponent your most dangerous tool of violence, which is that of YOUR OWN BODYWEIGHT.

Because, whatever appendage you decide to crush him with, it is your BODYWEIGHT that is doing the real damage. It is your bodyweight that also makes it so much easier.

Further, if the opponent is already moving to you when you drop step your bodyweight into, say, his throat, then that piece of trash is going down real hard.

If a guy swings a bat, and you violently charge into it, you’re going to neutralize it.

And, how hard is it to learn the damn drop step?

SO simple. So vicious. So easy. Solves SO many problems simultaneously.

Try to charge a fortune in classes to learn the simple “defense” tactic of running into a guy attacking you.

The only reason it may seem strange at first, is because you’ll naturally freeze, wanting to run away.

So, you condition to react INTO the opponent, rather than away.

You don’t condition a “flinch” response of a static forearm shield. That’s a defensive, losing mindset. Better to combine the dropstep with forearm to the throat. Same movement, except…it’s MOVING INTO the opponent.

Your mind is the weapon, and your ENTIRE BODY is the tool.

It’s important to remember that you are smashing your opponent with your ENTIRE BODY. Whatever extension of it happens to hit him is merely a question of convenience and targeting.

Just a shoulder into his solar plexus, with your ENTIRE BODY, as he’s unloading something will be far from pleasant. And, how hard is that?

Hell, a 90 lb chick could put me down with that, if I was dumb enough to do that.

Fourth, the drop step just naturally allows you to crush ankles, insteps, and feet, etc, in that same natural forward movement of your ENTIRE BODY. These are often overlooked, but generally easy to get to when you are MOVING INTO THE OPPONENT.

Until he’s dead or you decide to be merciful, because he’s now writhing in pain beneath you, dreading his imminent delivery to the devil.

If I was training people, we would do nothing but the drop step for an entire day. They’d drop step like five miles, shoving a BOB on a cart all over the place. Because THAT is the foundation.

Not just physically, but mentally.

End and I couldn’t have said it better myself (that’s why I posted it!).

The Secret to the SDTS is the Drop Step and the Forward Drive. It’s what separates us from 99.9% of any other systems out there and it is the “secret”. This will enable you to control the two pillars of self defense MOMENTUM and BALANCE.

To Learn more about the SDTS go HERE <<<