The Ultimate Choice: Sacrifice or Regret. 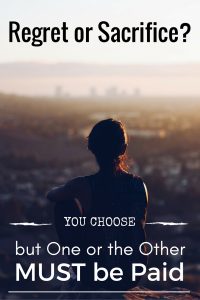 The Ultimate Choice: Sacrifice or Regret.

Every day you wake up and make a choice between SACRIFICE and REGRET.

Sacrifice is the act of giving up something valued for the sake of something else regarded as more important or worthy.

Regret is feeling sad, repentant, or disappointed over something that has happened or been done, especially a loss or missed opportunity.

Sacrifice something now or regret not doing it later.

As an instructor, coach, entrepreneur father and husband I see this battle all too often.

People quit training because they don’t have the time or can’t “find” the money. Players quit sports because they don’t want to do the work or hang out with their friends. There are always excuses – but if you dig deep enough, you’ll find that you’re just being lazy.

The man who complains that he can’t pay for training still manages to buy alcohol.

The kid who quits sports because he has to study but still finds time to hand out with his friends and play xbox.

Here’s one thing I know for sure…I never met a middle aged man who was sorry for staying on the football team and I never met a victim that was upset because they trained.

EVERY DAY we hear from people who REGRET not preparing, even in the slightest, to protect themselves and their loved ones and every time they say the same thing “If only I knew this back then.”

Like the saying goes – there are NO atheists in foxholes and there are NO victims who think twice about sacrificing a little time and money to protect themselves and their loved ones AFTER they’ve experienced real violence.

Sacrifice is felt immediately, and replaced with a sense of accomplishment and confidence while regret is long term and can’t be fixed because the damage is done. It’s too late. You can’t go back in time before the attack and you can’t go back to high school and get back on the team.

All regret will do is serve as a harsh reminder of your failure to sacrifice.

Every day, every moment you have a choice – Sacrifice or Regret.

I know you have an excuse and let me save you some time – I DON’T BELIVE YOU – so don’t bother telling me. If you really want it, you will FIND A WAY.

Because if you were in that bad of shape you wouldn’t feel compelled to tell me, a complete stranger, about your problems. In fact you should be too busy trying to fix them.