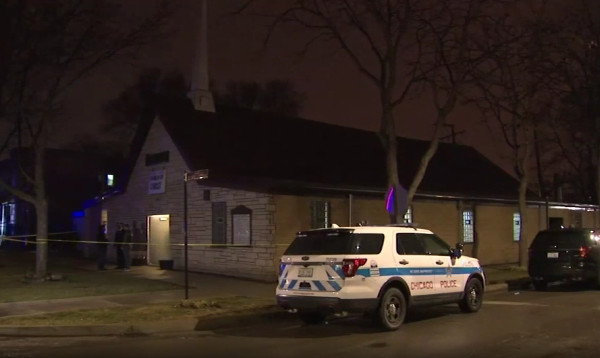 On Wednesday, 28 March, 2018, the West Maypole Avenue Church of Christ was having a Bible study that started at 7:30 p.m. At 8:09 p.m., the study was interrupted by 27-year-old Kenneth Baines, who announced an armed robbery. A 57-year-old armed church member was seated inside. The church member was legally armed and had a concealed carry permit.

A 57-year-old man was sitting in a the church at 8:09 p.m. in the 4400 block of West Maypole when a 27-year-old man walked in and announced a robbery, according to Chicago Police.

Maypole Avenue Church of Christ is located at 4400 W. Maypole.

The two men then started shooting at each other, police said. The older man was struck in the left arm and taken to Mount Sinai Hospital in good condition. The robber was shot multiple times in the chest and was in critical condition at Stroger Hospital.

From the Maypole Ave Church of Christ Facebook page:

“We solemnly pray for our brother in Christ and the perpetrator of this heinous deed.”

To be a paid and armed security guard in Chicago, a special permit is required, 40 additional hours of training to be armed, and they need to be employed by a by a company with special licensing and liability insurance.

It seems unlikely that a church would go to the expense of several hundreds of dollars of licensing fees and the liability insurance when it could use volunteers with concealed carry licenses at no cost or additional insurance.

This is particularly true for an evening Bible study in the middle of the week. Churches have numerous such events. They are seldom targets of robberies, for donations are not usually collected there. Paying a security company for a licensed security guard would be prohibitively expensive for most small churches. Few would be willing to spend the thousands of dollars necessary when most churches will have members who have police or military training, and who are familiar with firearms.  Members who would be glad to serve the church at no cost.

That is the case at my church, where I am a member of the church security team.

The coverage of the gunfight in the Maypole Avenue Church of Christ, except for the earliest reports, call the church member who shot the armed robbery suspect a “security guard”.  This gives the misleading impression that he was a paid and licensed professional, rather than a church volunteer.

This is important because of the ongoing debate about whether ordinary people are capable of acting in defense of themselves and others.  Licensed security guards are heavily regulated and controlled by the State. Because of federal court cases about the Second Amendment, shall issue concealed carry permits are available to the vast majority of Illinois residents with much less effort.

Calling a church volunteer a “security guard” while ignoring their voluntary status, makes it seem that only professionals can be trusted with this duty. This was done in the case of Jeanne Assam, who stopped a mass killing at the New Life Church in Colorado Springs in 2007.

The name of the church volunteer has not been released. If any reader has personal knowledge of this case, please help us confirm the status of the 57-year-old defender.

©2018 by Dean Weingarten: Permission to share is granted when this notice is included.