Who is Captain Chris Pizzo 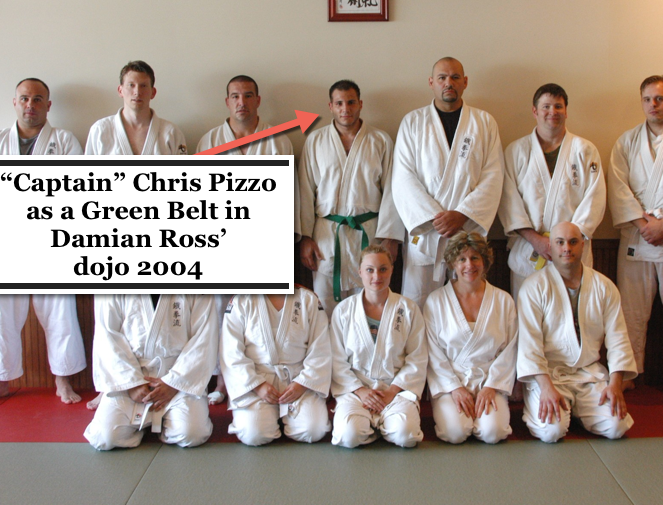 Who is Captain Chris Pizzo

Chris Pizzo made a name for himself as Lt. X and then later as Captain Chris Pizzo selling combatives DVD’s through the Close Combat Company Brand to thousands of people. Chris Pizzo’s marketing and promotion made OUTRAGEOUS claims. He claimed to be in the Special Forces and served in the HUMNIT (HERE), he also claimed to have survived and “aggressive strain of cancer” which is still on his LinkedIn Profile. Chris has said to have been a bouncer, survived a street fight where a “biker chick” tried to stab him,  traveled all over the world training elite soldiers and assassins  – none of which is has been proven to be true.

On his LinkedIn profile Chris Pizzo also claims to have won hundreds of tournaments “The proud recipient of over 100 trophies and medals, including a U.S. Gold Medal for grappling, for various martial arts and fighting styles”.  None of this is true has been proven to be true. (More Evidence in a Press Release HERE)

In 2007, Chris Pizzo was engaged in a law suit with his former combatives and judo instructor Damian Ross. After Pizzo and Ross parted ways in October of 2007, Mr’ Pizzo sold $1.2 million worth of Mr. Ross’ name and likeness and was sued (and lost). As you will discover Mr. Pizzo revealed in a sworn deposition that after he graduated from William Paterson University he was a graphic designer at a toy company and then taught high school graphics in new jersey. Nothing about the military, cancer or winning 150 medals, traveling around the world and teaching assassins.

The Truth About Chris Pizzo

So where has Chris Pizzo been since 2015? Paying off Damian Ross. As part of his settlement agreement, Chris was only allowed to sell his products on UDEMY and use that money to pay off his settlement agreement. As of June 16th 2020, Chris has fulfilled his financial obligation and it is our guess he is now free to market his version of combatives and self defense once again – one can only imagine what he will claim this time around…

To the best of My Knowledge, this is what I know about Chris Pizzo…

The following is based on my personal experience with Chris up until 2015. It’s based on my experience and the testimony he gave in his deposition during our 6 year lawsuit. After the beginning of 2016, I have no idea what Chris has been doing.

Chris Pizzo grew up in Franklin Lakes New Jersey. His father was an ear, nose and throat doctor. He attended Indian Hills High School and  graduated in 1991. He went to Ithaca College and had semester of ROTC at neighboring Cornell University. After his first year he left and transferred to local state school William Paterson University where he graduated in 1998 with a degree in graphic design.

For a few years he designed for a toy company and then landed a job as a teacher and Bergen County Vocational School (not Bergen Academies as indicated on his LinkedIn Profile). He taught from 1999 to 2005 and it was during this time, he stated Noble Learning, and LT.X was born.

Chris came to my Pompton Lakes Dojo in 2004. He claimed to have earned a Black Belt in Tae Kwon Do as a child  from Master Bai in Ramsey, NJ and a Green Belt in Judo from Ogasawara in Westwood, NJ. I could verify the green belt from Ogasawara since I was an instructor in the USJF. But I could not verify his black belt – either way it was a non-issue because Chris wanted to start as a white belt.

Over the next year Chris and I became friends and training partners. He was tough, strong and worked hard. He loved the combatives and soon realized that people should be learning it. I didn’t know at the time he was LT X. I didn’t even know Lt X. existed. I knew he was a teacher and had a company that sold CDs to help kids concentrate on their homework.

I told him that I was selling combatives videos of me and my instructor Carl Cestari online. Chris suggested I look at some of Dan Kennedy and Matt Furey’s marketing content and Chris started helping me market my videos. His suggestions worked and I sold more.

After a few more months (it was right after my dad died in 2005) he revealed that he was LT X and then he showed me how much he was making selling low budget videos of him in a balaclava doing typical self defense moves you would find in any strip mall.

He said he wanted my lineage and content to bring this business over the top. I agreed and he took over my content and we created more. Over the next two years we had an extremely lucrative and fun relationship. Chris handled the marketing and distribution, I provided the content.

During this time, I was competing a lot in Judo and Chris was one of my primary training partners. He was consistent and good in the dojo – however, Chris really didn’t like competing and did not perform well in competitions. That’s why when he later claimed to have won all of those championships in his advertising I found it funny.

Things started to turn the summer of 2007. Chris began thinking that he didn’t need me and he would “become the expert” and truth be told – he was right in the sense that most anyone could claim to be “the expert”. All you needed was good marketing and a great offer.

That’s when we started to renegotiate my contract and he offered me pennies on the dollar. And in October 2007 we parted ways…but that was not all.

Chris took it upon himself to finance his new venture with my content and not pay me. Over the course of 3 months he sold $1.2 million worth of my videos. What followed was a 6 year law suit that traveled though 4 states and ended with a victory for the good guys (me).

During his deposition we discovered:

I met Chris in 2004 and knew where he was until 2007. Then he moved to California. To the best of my knowledge he has been training in Brazilian Jujitsu. He purchased Gracie Barra around 2010 but that deal fell through and they wound up taking it back. He was teaching at another local club and started a company “Way of the Warrior” teaching martial artists how to get high end clients. I don’t know how Chris has earned his living since 2015, but I don’t think he ever taught a high end client – then again, I don’t know what he’s been doing since he left NJ.

So that being said, it looks like Chris Pizzo is back in the self defense world. He was on Udemy (still is I think) but he was using that to pay me off – now that he’s finished paying me off (Thank You Chris) he’s back in business! So welcome back my old student.

THIS JUST IN…Chris Pizzo is STILL AT IT!!

The good thing about Judo is that you can look it up . There are two organizations – the USJF and the USJA and both register their black belts with The Kodokan and if you don’t have certificates that look like this…(you ain’t real).

You can email the Kodokan yourself to see to verify any membership here: intl@kodokan.org. 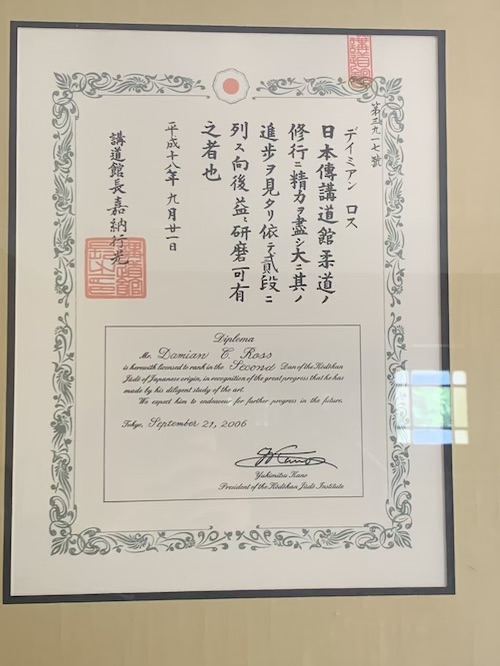 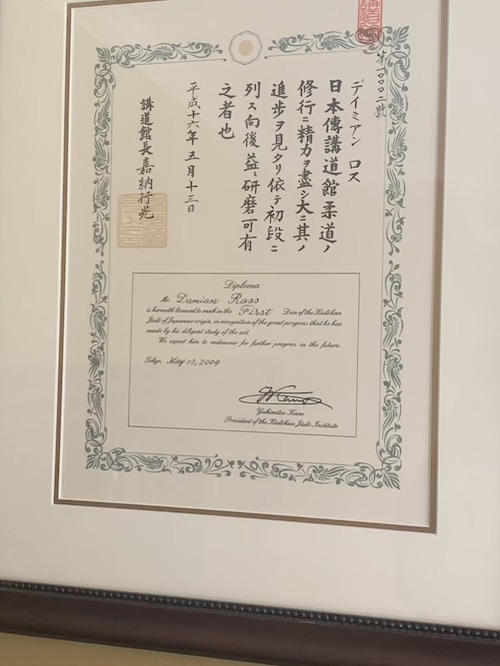 Oh… and Chris is “talking the talk” here’s a posted story about an alleged bar fight that may or may not have happened HERE.

Either way…the more things change, the more they stay the same.