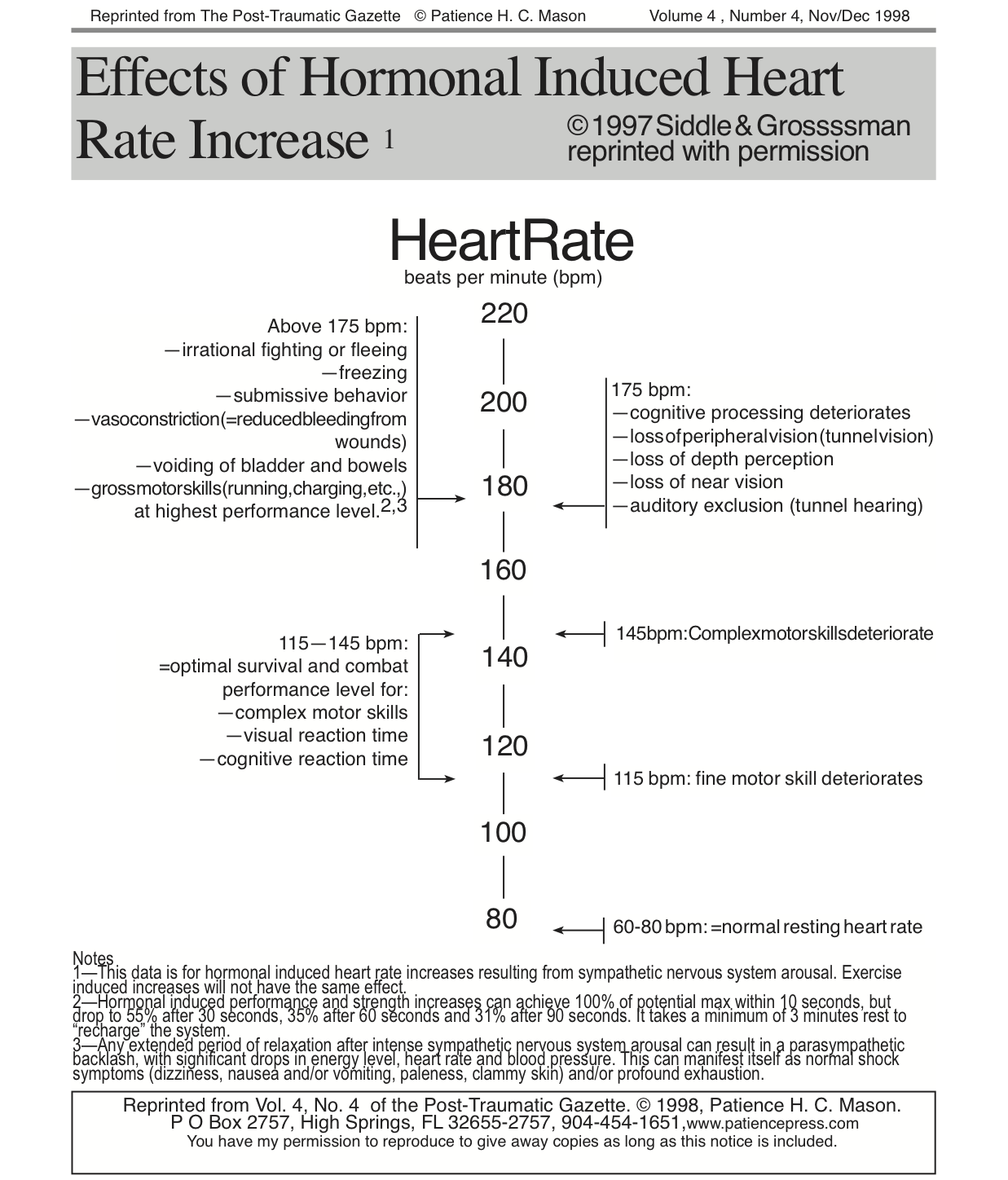 Why do seasoned martial artists and pro-fighters go from throwing precise, technically correct, crisp punches in the gym to wild haymakers in the street?

I noticed this phenomenon when I was bouncing. Guys like these would be hell in ring but when it came to the real thing, they would miss and throw arm punches that were incredibly ineffective.

Make no mistake…I’ve seen these guys break bricks and knock guys out cold in competition, but in the street, some of them looked like they never spent a day in the gym!

I was no different. I would abandon my formal training and resort to really simple movements like a double leg takedown and haymaker type strikes.

On the other hand, in the ring and in practice I could control my adrenaline and focus my technique – but in the street it was like someone put their foot down on the accelerator and I was out of control.

Later when I started learning what would become The Self Defense Training System, I discovered what really happens to the body when there’s risk of serious injury or death.

This is commonly referred to as “FIGHT or FLIGHT” and it only happens when you BELIEVE your life is in danger and there’s no way to control it. You can’t meditate it away and you can’t relax your way out of it. It’s evolution’s way of preparing you for battle, it’s here to stay and you need to embrace it and train within the confines of the skills you can perform.

The chart above details exactly what happens when you truly believe you’re under attack and it is impossible to replicate it in training.

When you perceive real danger you feel FEAR. Fear triggers the release of hormones that increase your heart rate and cause the effects listed above. This is scientifically known as the Sympathetic Nervous System Activation. Some people refer to it as your “animal brain.”

The main point you need to take from this are the motor and cognitive skills that are available to execute when you’re in a real fight.

The problem is the skills you commonly practice in typical martial arts and self defense systems cannot be performed under fight or fight conditions.

Motor Skills are broken down into 3 categories

Complex Motor Skills – Swinging a Bat, Kicking a Ball or a Somersault.

Fine Motor Skills  – involve the secondary and smaller joints like the fingers, wrists and elbows.

Most self defense skills that are taught use Fine Motor Skills like:

If you look at most self defense techniques you’ll see intricate maneuvers that require precision and dexterity. Especially when it comes to weapon defenses.

It seems the more dangerous the situation…the more complicated technique. When in reality, the more stressful the situation, the simpler the technique needs to be.

For years I couldn’t figure out why my martial arts and self defense training didn’t work like it did in training.

But now I know, SNS activation is the reason why trained fighters look like they never spent a day in the gym when they’re in a real fight. It’s not their fault, they’re just trying to fit the round peg in the square hole.

Martial Arts is CHESS, Self Defense is CHECKERS.

Martial arts requires skill, training and subtle movements to create openings and opportunity. It is based on specific counters and attacks in a controlled environment.

Self defense is literally the simplified version of martial arts. The overall concepts of combat are the same, but they are much broader. But as “simple” as these techniques are, the more BRUTAL and violent they need to be.

Self defense is an emotional, visceral experience and you need to prepare for it differently.

This is why I only use complex and gross motor skills in the Self Defense Training System. They’re the ONLY ones that work in real fight or flight situations.

The upside is these SDTS skills are:

When is the last time you kicked a ball or rode a bike? Years right? Those are complex motor skills. Sure if you practice them you will become better but in general you can still perform them even after years of non-practice.

This is how the Self Defense Training System works. Once you know how to do these skills, they stick with you….forever.

There’s a limited amount of skills that you can perform under stress. For self defense you need to focus on those and forget the rest.