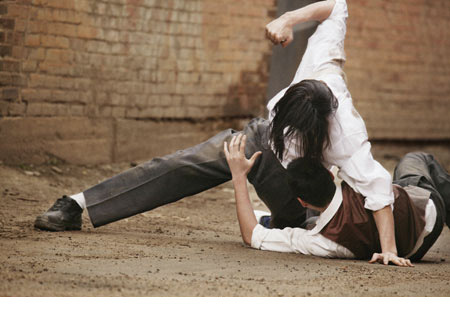 The moment you worry if a “move”,  “weapon” or “tactic” is illegal, you’ve already lost.

Because the bad guy, bully or rapist doesn’t give a sh!t about you or the law.

They want to take whatever you have whether you like it or not.

When I see comments like “that’s illegal” or “that’s not self defense” you’ve already lost.

Because you’re not prepared to FLIP THE SWITCH and do whatever it takes.

You have a limit and in self defense, limits CANNOT exist.

If “whatever it takes” means carrying or concealing something that some pencil pusher thought was “too brutal” so be it.

If my little girl or wife carries pepper spray in a state that’s illegal, oh well, we’ll take our chances.

If my mom drives a push dagger into a scumbag’s neck while he’s trying to beat her – we’ll deal with the consequences LATER.

If you take this (self defense) seriously and want to have the BEST CHANCE of survival – You must be willing to go DEEPER and DARKER than the son of a bitch who wants to end you or YOU WILL LOSE…badly.

I’ve made my mind up long ago to do whatever it takes to survive. It’s a mindset you must adopt.

That’s exactly HOW I TEACH and HOW I TRAIN.

In the Self Defense Training System I give you EVERYTHING you need. No stone is unturned, no dirty trick left out.

I give you everything then YOU DECIDE what you’re willing to do, or use to protect yourself and your loved ones.

Worried that a black jack is illegal? – you’ve already lost.

You think banging a guys head off of the pavement it too much?  – you’ve already lost.

People in the real world aren’t going to submit like your training partner. They’re in fear for their lives and will fight harder than you can imagine.

Don’t want to go to jail? you’ve already lost.
Because no matter what you do, if you defend yourself in any way YOU WILL STILL HAVE TO GO TO COURT.

Think a gun is all you need? you’ve already lost.
As soon as you depend on someone or something other than yourself, YOU WILL FAIL.  Murphy’s law is in full effect – what can go wrong, WILL GO WRONG.

You need to adapt and move forward and be willing to do whatever it takes.

Now I say this, with all of the weight and responsibility of the world.

I will give you every opportunity to stand down.

I will tell you I don’t want a problem.

I will back away.

I will give you the parking spot and every other petty bullshit thing.

But if you cross the line, hell is coming to breakfast.

As an instructor, I will never tell you WHY to fight, only HOW to fight.

Beyond that, you should be the nicest guy anyone would ever want to meet.

Damian
The Self Defense Company