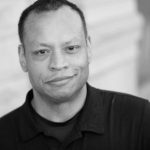 “I think it is important to post my bio so people can gain some insight into the kind of martial artist that I am, and where I am coming from. My involvement in the martial arts was first and foremost as a means of self‐defense.”

As a biracial child, Mark discovered that growing up in certain neighborhoods was not always pleasant.

“Although I had seen martial arts in movies and on television, I quickly understood at an early age that

there was “Hollywood” fighting, and “real” fighting. This is important to note, because many martial

artists do not differentiate between the two.  My experience showed me that “pretty” or “intimidating”

techniques aren’t the ones that really work. The best techniques need to be simple, quick to be brutally effective against an attacker.”

I was first introduced to the Martial Arts when my mom sent me to a free week of Karate using a coupon. Though we could not afford to join the class I remember going over and over the horse stances, punches and blocks I had learned during that week. I remember it being fun and I was in awe of the older students doing their high flying kicks (I was young, what can I say). I still remember walking home and having the “usual” group of bullies harass me. I remember one throwing a punch and being amazed that I actually performed a crude outward block.

Unfortunately, I thought it was so cool that I did it that I forgot to keep focused and never saw the other punch coming. Needless to say that although I got my butt kicked, I was quite proud of myself for executing that block.

During the next few years I was content to workout with other kids from school who would teach me what they learned from their Martial Arts classes. Though there was no formal style I still consider it one of the best learning experiences in my Martial Arts studies.

Fast forward a few years and I ran into a friend who informed me that an Ed Parker KENPO Karate school had just opened in town. Though the price was barley what we could afford, I jumped right in and began some serious formal Martial Arts training. As the years passed I began to understand that there is always someone stronger than you. This led me on a quest for a Martial Art that could allow me to add some “changeup” to my arsenal.

The art I found was Hakko‐ryu Ju‐jitsu, an art developed by Soke Okuyama who was an instructor of Daito Ryu Aikijujutsu, which happens to be the “founding art” of many styles, including Akido. The place I went to study Ju‐Jitsu (Goshin Jutsu) was The Chicago heights Ju‐Jitsu Academy under Shihan Brian C. Smith. T

his was to be a very momentous move in my Martial Arts studies. It was through this avenue that I would learn more than I ever thought possible. We joined the organization Juko‐Kai under Soke Rod Sacharnoski, which led me to my studies of Combat Ki and Todie.

It was during the 50th anniversary of Juko‐Kai that I met a group of guys who studied Ninpo under Grand Master Masaaki Hatsumi. So what did I do? I went and joined the IBDA under Shihan Richard Van Donk so I could learn Grandmaster Hatsumi’s nine schools of Ninjitsu. I currently assist Shihan Smith with instructing classes at the Chicago Heights Ju‐Jitsu Academy. I also meet with students before or outside of class to go over everything from MMA training to weapons.

Following is a list of studies and or certifications I have obtained:

It is no doubt that Instructor Hale will be a valued asset to The Self Defense Company Corp of Instructors.

Go HERE to contact Instructor Hale in the Chicago Area<<<

Visit here to start the Self Defense Training System <<<