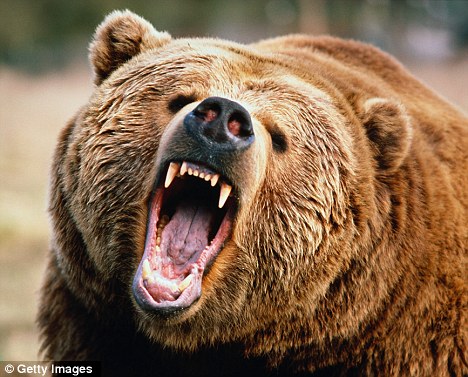 How to survive animal attacks – Lions and Sharks and Bears (Oh my!)

5 true stories and the bad asses who lived to tell the tale.

Pop quiz: If you get attacked by a grizzly, you should:

B) punch, kick and fight for your life

C) stick your arm down the bear’s throat.

Most survival guides would say option A is correct. But bowhunter Chase Dellwo has recently made national news proving otherwise.

On Oct. 3, the 26-year-old Dellwo had a violent run-in with a 350- to 400-pound male grizzly while hunting elk in the Montana wilderness. The bear knocked him off his feet, took a bite out of his head and leg, and tossed him in the air like a rag doll.

Facing certain death, Dellwo said he suddenly remembered a magazine article his grandmother had given him years earlier that said large animals had horrible gag reflexes.

Literally risking life and limb, he then shoved his right arm down the bear’s throat.

Surprisingly, this seemingly idiotic self-defense tactic worked perfectly. The bear stopped its rampage and left the area. After the attack, Dellwo was hospitalized with wounds to his heads, face and leg. The good news is doctors expected him to make a full recovery, and for his sheer audacity, he will probably never have to pay for his drinks at the bar ever again.

Throughout mankind’s history, there have been plenty of outrageous tales of average citizens using their wits to survive rampaging animal attacks.

Besides Dellwo’s tale, here are four of the most insane stories we could find.

While field dressing a deer buck near Kodiak, Alaska, in 1999, Moe was viciously attacked by a 750-pound grizzly bear. Big mistake.

Though outweighed and outmatched, Moe fought back in bloody hand-to-claw combat. Then Moe punched the grizzly bear right in its face, knocking it unconscious. He then put two bullets in the bear’s chest to finish it off for good.

Let me repeat that: Moe punched a wild 750-pound grizzly and knocked it out cold.

But that’s not the most amazing part of the story — Moe was 68 years old at the time of the attack, old enough to collect Social Security.

Afterward, we could only imagine that Sir Gene Moe celebrated his knock-out by going home, eating rusty nails and spending the night watching “Lone Wolf McQuade” and mumbling to himself, “Chuck Norris is a punk” while drinking 180-proof whiskey from the bottle.

We’ve all heard these two adages our entire lives. But in 2010, Alabama resident Frank Harmes learned the hard way that only one of them is true.

Harmes was walking his dog along some pathways in Morgan City, Alabama, when he came across an adult mountain lion. Survival textbooks say to make yourself appear larger than you already are to scare off an angry cougar. Though Harmes attempted to scare the big bad cat away, the animal attacked him.

As he lay helplessly on his back as the mountain lion pounced, Harmes brandished his small pocket knife and stabbed the animal relentlessly. Eventually, the small wounds made their impact, and the cougar ran off into the southern wilderness, never to be seen again.

Thankfully, Harmes was prepared for anything with his trusty pocket knife by his side. His dog, on the other hand, did absolutely nothing.

Fido sat by and watched Harmes nearly get slaughtered, probably licking himself and wondering how he was going to break it to his human that there was no way he was going to share the house with a cat.

Not all friendly animal species are as useless as Harmes’s mutt.

Take the story of Todd Endris, for example. In 2007, Endris was surfing off the coast of Monterey, California, when a great white shark attacked him. The attack left the 24-year-old’s leg and back mutilated, with some of his skin peeled right off his bones.

Just as the shark was about to come in for the final kill, a pod of dolphins came out of nowhere and formed a protective ring around the injured surfer. This ring allowed Endris to safely swim to shore.

Whether it’s a shark attack or a drowning, there have been numerous stories dating back to ancient Greece of dolphins swooping in out of nowhere to save the day for imperiled humans.

For example, in 2004, when a group of swimmers were being threatened by a great white shark off the coast of New Zealand, a pod of dolphins emerged and swam around the humans for 40 minutes. Eventually, the hungry shark got annoyed and moved on to other food sources.

Scientists aren’t sure why dolphins are so protective of humans, but these stories make you rethink which animals are really man’s best friend.

In the annals of American history, 19th century fur trapper Hugh Glass was Rambo, John McClane and Clint Eastwood all rolled into one unkillable package.

In 1823, Glass got on the wrong side of a grizzly and her two cubs in the present-day South Dakota area and paid the price for it. His leg was broken in the ensuing attack, and his body was covered in open wounds, including cuts on his back so severe his ribs were reportedly exposed.

He was mauled so badly that when trapping partners Jim Bridger and John Fitzgerald first laid eyes on his mangled body, their first response was to start digging a grave. When the burial ceremony was interrupted by an Indian attack, Bridger and Fitzgerald took Glass’s weapons and equipment and abandoned their unconscious trapping partner.

But Glass wasn’t going to go down that easily.

Once he regained consciousness, he set his leg and began the 200-mile crawl to the nearest American settlement. The hellish journey took six weeks to complete, but once he reached Fort Kiowa, he had quite a tale to tell.

His methods of survival were both fascinating and disgusting. He feasted on wild berries and whatever else he could find, even scaring some wolves away from a dead bison so he could eat its meat.

The wound on his back was particularly bothersome, but Glass found ways to manage. To prevent gangrene from forming, he laid on a rotting wood log so the maggots would eat away his dead flesh. And in an irony that was probably lost on Glass’s deluded mind at the time, a friendly Native American tribe sewed a bear hide over his wounds.

Though brutally battered, bloodied and beaten, Glass eventually made a full recovery. Once he was healthy, he decided to hunt down Bridger and Fitzgerald to get murderous revenge. Or he just wanted his weapons and equipment back, depending on the source.

Glass’s amazing story of survival against the odds has recently been turned into a movie called “The Revenant,” which is set for release at the end of December. The movie has already attracted Oscar buzz, and since Glass is played by Leonardo DiCaprio, you can expect him to be the early favorite for Best Actor before he loses to some unknown actor for yet another year.

Story was originally published by: https://www.idahostatejournal.com/