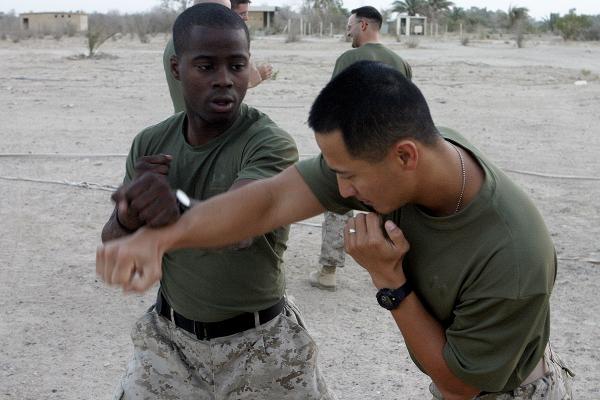 When I started training in martial arts I believed that I would be able to identify an attack and correctly block the attack with one of the several blocks I practiced day in and day out.

But when I sparred I noticed that I didn’t use any of the blocks. I would simply move my head or parry the incoming kick or punch and use distance to move in and out of range.

So why was I wasting my time learning how to block?

I was told by my instructors that the blocks were for SELF DEFENSE.

So I continued to train my blocks and teach them for over a decade. Believing that I had the ability to actually “block an attack”.

Unfortunately I was wrong, my instructors were wrong.

This assumption is not just a little FALSE, but it’s IMPOSSIBLE because your eye, brain and hand don’t work that fast – check out this video from the show “Brain Games” it illustrates my point perfectly.

This is NOT a trick or an illusion. Later in the segment a little girl was able to snatch the dollar without any problem!

The reason this guy can’t snatch the dollar…is the same reason you can’t block a random attack in the street.

Because ACTION IS FASTER THAN REACTION!

The split second it takes for your eye to tell your brain to move your hand is way TOO LONG.

And in self defense, you’re not playing some parlor game — you are facing someone who wants to hurt you…BAD.

Even more to consider…

The person in this case knows exactly that the person is going to snatch the dollar and they know it’s going to happen now.

In the street you don’t know how or even if the threat is going to attack. This results in even MORE time it takes for you to react.

Oh, and that’s just one attack, in the street you will face a barrage of attacks from someone who is intent on hurting you.

You may be able to COVER – but it’s still over. In a real fight you’re either getting hit or hitting, you’re being attacked or attacking.

Look, you don’t know who you’re facing in the street. It could be an ex-boxer or a really good street fighter and one or two shots is all they need.

Blocks in the dojo appear to work because…

You and your partner both know the attack since you practiced it 100 times before.

Even if it’s “random”, your partner is going to telegraph their attack and let you block it.

They’re not REALLY trying to hit you – subconsciously they pull their attack.

I understand that this is a hard pill to swallow, especially if you’re like me and have invested countless hours learning how to block. But facts are facts and science is science and you don’t need blocks for self defense.

Instead, take a position of advantage, use distance, movement and momentum.

When you attack, use a method that provides cover, protection and can disrupt your attacker’s advance – like the Edge of Hand.

Once you attack you – keep attacking, take ground and move forward.

This will disrupt your attacker’s balance, increase power in your attack and keep moving the target (in most cases your head) making it difficult to hit.

This is a day one, core principle stuff of the SDTS.