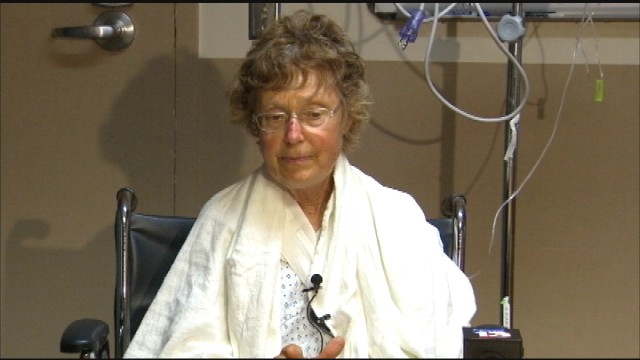 ORLANDO, Fla. (WOFL FOX 35 ORLANDO) –
A 70-year-old woman was attacked while walking around Lake Adair in Orlando’s College Park neighborhood early Wednesday morning, in what is being called an attempted robbery.

Eleanor Trouse was circling the lake for the fifth time at about 5:30 a.m., when a car rolled up behind her slowly on the brick street. She tells FOX 35 that she immediately took off running backwards, and was terrified when a man got out of the passenger side.

“He was too fast for me. I could not get away, and he grabbed me by my arm with such strength and might, and he threw me to the brick street,” she explained.

The former Orlando Sentinel employee said the man was silent at first.

Eventually, the man yanked her back to her feet and asked her for money. Trouse said she just reacted by screaming.

“And I just kept screaming. He went and got back in the car, and they sped off.”

Trouse suffered a broken arm in the incident, and said she will never walk anywhere again when it is dark outside. She also wanted to warn both men and women that she did not feel night time walks in Orlando are safe anymore.

“I would say so not walk in any area after dark. I can not tell you how vulnerable I felt.”

Unfortunately, she did not get a good look at her attacker, since it was so dark, other than to say it was a white male.

What Can You Learn From This Attack?

1. REGRET – Eleanor realizes how vulnerable she is, the same goes for everyone who doesn’t  prepare in some way for an attack. This regret happens immediately after the assault. We take our safety for granted and don’t give the proper respect to what can actually happen.

Without any training at all or a firearm, this 70 year old women was able to stop the attack and survive with minor injuries.

Statistically the odds are in her favor since 87% of women who resist are successful.

Notice, she didn’t need to “defeat him” all she did was resist by running and yelling – and that was enough to stop him.

Self defense is ACTIVE RESISTANCE, its a plan to help you survive violence, not win a prize fight.

Most attackers don’t want a fight, they want a victim. ANY RESISTANCE IS GOOD.

Imagine if she was even the least bit prepared…

Anyone with information about the early morning attack near the intersection of Lake Adair Street and Westmoreland Drive is asked to call Crime-line at 1-800-423-TIPS (8477).