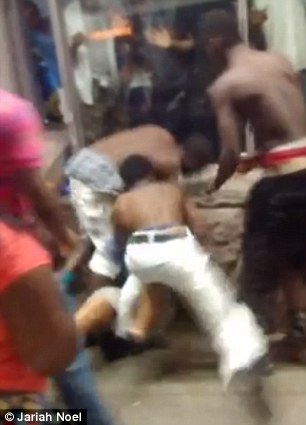 Chris McKnight, 27  was beaten by multiple attackers and later treated for a broken nose and concussion at a nearby hospital.

The video below was captured by a bystander.

Since we can’t see how the fight started – according to eyewitnesses, McKnight bumped into another person and that’s how the fight began. In the video you see McKnight being taken to the ground in a headlock and remain immobile and unprotected as other assailants assaulted him.

The biggest mistake McKnight made here was GOING TO THE GROUND.

This is an example of  why you don’t choose the ground in a fight. While McKnight is being held down, multiple assailants were able to punch and stomp him at will. Even if McKnight were to gain the position of advantage on top, he would have been even MORE vulnerable to the secondary attacks.

McKnight is lucky…this could have gone a lot worse.

On the other hand, in self defense when you feel yourself going to the ground in a fight, you need to fight like hell to keep your balance and if you do happen to go to the ground, your main objective is to get back up to your feet as fast as possible.

That means you need to shift the weight of the guy on top of you off. In this case, McKnight has complete access to his attacker’s face. A simple eye hook and face rip from Self Defense Training System Module 3 would do the trick. All you need to do is create enough space so you can push yourself free with larger muscle groups. Even a BJJ sweep or wrestling reversal wouldn’t have worked since he was stuck in the corner. Besides, even if he was on top of him – those other guys would have STILL beaten him bloody or worse since the back of you neck, skull and spine are exposed.

Which brings me to another point…look at the environment. Benches, cement sidewalk, other people, walls, curbs…BUSES. Any number of those things can put a hurt on you. The ground is an unforgiving place and you need to go into PANIC mode as soon as you feel you’re going down.

Remember – EVERY FIGHT is a multiple attacker scenario. I’m sure Chris thought he was in a fight with one guy which is a mistake a lot of people make. You assume from our martial arts training and your views of “right and wrong” that it’s going to be a fair fight…LOL no fight is fair.

At the end of the day, it doesn’t matter who’s right, only who’s left.