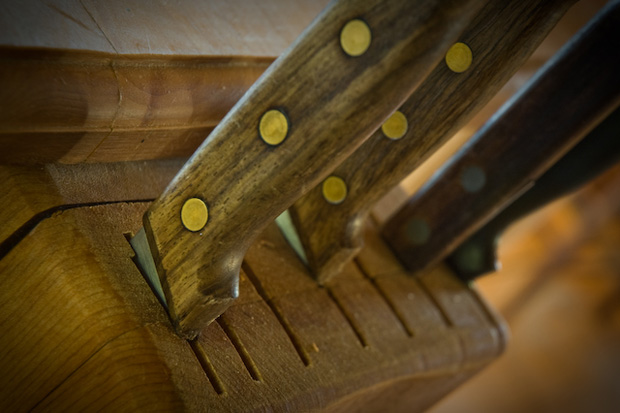 A 75-year -old man who found an intruder in his Bastrop County home fatally stabbed him with a steak knife, the Bastrop County sheriff’s office said Tuesday.

Marion Lee Hill, a longtime Cedar Creek resident and local business owner, came home Friday night to find a man, identified as 38-year- old Jonathon W. Jones, in his home, officials said. A struggle ensued in Hill’s living room and then moved to the kitchen, where Hill grabbed a steak knife and stabbed Jones in his left arm and chest, officials said.

Hill’s friends and neighbors in the community of Cedar Creek, about 12 miles southeast of Austin-Bergstrom International Airport, expressed relief that Hill fought off the intruder, and at least one was not surprised.

“He’s in pretty good shape,” said friend Dwight Hamilton, 61, who says Hill runs a local bar, the Stumble In, as well as a construction business in the Cedar Creek area.

The sheriff’s office said Tuesday that it considers the botched home invasion an isolated case and said there are no charges pending against Hill, who suffered several injuries to his face. The sheriff’s office considers Hill’s actions self-defense but will continue to investigate, said Sissy Jones, executive assistant to Sheriff Terry Pickering.

Hill could not be reached at his business, and no one answered the door Tuesday at his home, at the end of a gravel driveway in the 300 block of Lake View Drive. Neighbors said they were glad to hear it was an isolated incident.

Simpson said that although there have been drug problems in the area in the past, it’s a relatively safe place to live.

The sheriff’s office said they received a report of a burglary at Hill’s residence at 11:16 p.m. Friday and learned while en route that the intruder had possibly been stabbed, officials said.

“Preliminary investigation indicates that this was a home invasion,” the sheriff’s office said in a statement. “Mr. Jones was inside the home prior to Mr. Hill’s arrival. A struggle ensued, resulted in the death of Mr. Jones. An autopsy report revealed a fatal stab wound to the chest.”

Hamilton, who has known Hill for about 10 years, said his friend has hosted a local chili cook-off at the Stumble In, which is on Texas 21. And last year, Hill, also a chili connoisseur, won first place in pork ribs for the Central Texas Tolbert Chili Group, said Hamilton, who co-founded the group.