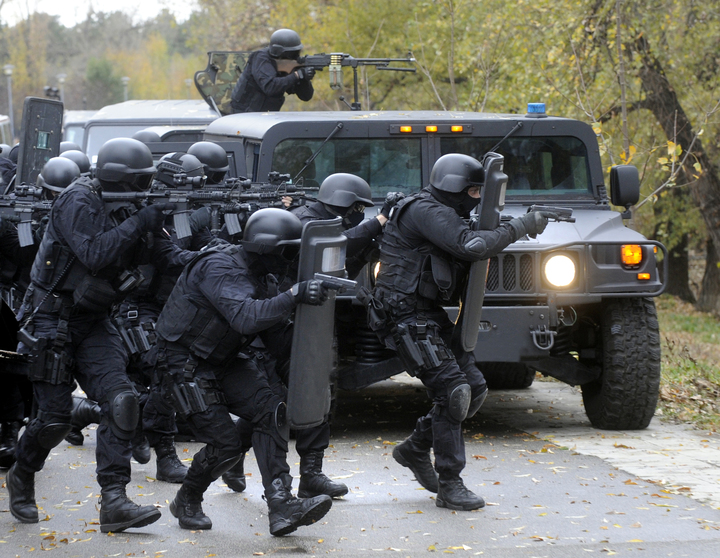 What does a heavily armed operator with a mission objective, equipped with intelligence, superior numbers and technology have to do with you being stalked when you’re alone, walking to your car in an empty parking lot…?

Yet every expert (myself included) love to crow about teaching SEAL team 12 or Super Secret Death Squads.

That’s those who don’t know the truth are impressed, but the fact is….

“The Tactical Training the Police and Military Receive has NOTHING to do with Your Personal Self Defense.”

A heavily armed soldier or police officer on a team, responding to a call or deployed on a mission who’s armed to the teeth, expecting conflict from an known enemy have absolutely ZERO to do with your being approached by a potential threat with unknown intentions and capabilities.

I know what you’re thinking… rogue, lone wolf cop, Jason Bourne-type, on the mean streets, behind enemy lines – pissing in the face of danger and single handedly taking a part a biker gang or a terrorist cell by himself. I like the movies too – but…

…officers and soldiers put their lives on the line every day…BUT THEY’RE NOT GOING TO BE STUPID ABOUT IT.

The plan for contingencies and have the ability to adapt to changing situations – this is what makes them successful.

As a soldier you deploy on a mission and you are EXPECTING conflict. You have an objective and an idea of what to expect based on the intelligence collected.  Then you use technology ( like drones and night vision) and arm yourself with more weapons and more people than you anticipate contacting.

Even SEALS and other special forces we so love to claim train in our systems, don’t have an OFFICIAL  hand to hand “system” per se because it’s just not part of their mission tactics like it was in WW2 and Vietnam.

Now I will say that some use combat sports like MMA, wrestling and boxing to test themselves, compete,  or blow off steam to soften the edge while in theater waiting to deploy –  but once they’re geared up with 70 pound plus of ballistic plates, ammo, weaponry and communications – well they’re not just not that nimble anymore.

Now I said they don’t have an official hand to hand system but that DOES NOT MEAN they don’t know how to fight . These guys are such BAD ASSES, with such a strong will to survive, compete and win that they will do WHATEVER IT TAKES AS FAST AS POSSIBLE (which is the REAL secret to self defense).

Like soldiers deploying on a mission, while responding to a call, they’re doing their size up – determining the level of threat based on the information coming from dispatch and preparing to meet that threat.

When they arrive on scene they are constantly evaluating RISK vs. REWARD and life hazard.

And believe me when I say this – if a call comes over the radio and there’s a potential use of force situation – YOU CAN BET DOLLARS TO DONUTS (no offense) that EVERYONE and their mother is going to respond to that call.

Funny, we teach an arresting and cuffing procedure that involves a MINIMUM of 4 officers (you can see it on Protector).  That’s a 4-1 ratio of good guys to bad guys…but that’s not what really happens.

I actually have video of this working in the field – but this is an anomaly.

In reality, all of the cuffing training goes out the window because and it becomes a bum rush of bodies trying to get a hand on the subject….if they haven’t tasered or pepper sprayed him yet.

Bottom line, police officers will not stand by and watch a brother or sister struggle or put their life at risk and NOT HELP.

We make this self defense assumption when we hear “cop” or “military”  because we associate them putting their lives on the line with YOU putting your life on the line in self defense. What better validation than someone who’s been in harms way, right?

Unfortunately, as you just discovered, a police officer and solider will rarely, if ever find themselves in a hand to hand – one on one situation. If they do, they’ve made a mistake and a lot has gone wrong.

The police and military who want to address these situations contact guys like me for training. It’s not that mysterious, it’s either through someone I know, or contact us through the website. Then they either come to me or I come to them…not that complicated.

Responding to a call, expecting trouble is 180 degrees different from you commuting to work thinking about all of the stuff you need to get done.

You’re not in a COMBAT MINDSET and you need to training that takes this into consideration and teaches you how to FLIP THE SWITCH in an instant.

You’re not going to have time to ready yourself. Responding to a call gives you the time to control your adrenaline rush, manage your breathing and acclimate yourself – YOU DON’T HAVE THIS LUXURY.

You will be ALONE, OUT NUMBERED, facing a larger and stronger threat and any given time.

The odds will not be stacked in your favor.

Truth be told, cops and soldiers off duty experience the SAME thing you do.

You need to take these factors into consideration in your self defense education.