Self Defense Company Instructor Competes on Knife or Death 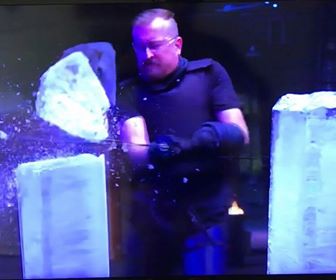 Self Defense Company Instructor Competes on Knife or Death

Knife or Death is a contest where competitors go through a grueling obstacle course with their edged weapon of choice.

The course tests your skill, your weapon and your endurance.

Below is some bonus footage of Instructor Landry where they talk about their weapon of choice and some concerns they have about the competition.

“The Shinobi Katana is basically a straight version of the Samurai’s Katana. I chose it to be different because that is what the show looks for.”

John’s preparation for the contest really didn’t vary from his regular training since he’s been practicing Kenjutsu (art of the sword) for 30 years. The only addition to his regular practice was cutting various objects.

Believe it or not, what he thought was going to be the hardest part of the course actually turned out to be the easiest. “The ice blocks were actually not anywhere near as difficult as I anticipated that they would be.”

However…much to his surprise the suspended boxes and the 2×4 were “extremely tough to cut.”

So…how did the course relate to actual combat swordsmanship?

“The course simulated real swordsmanship in the fact that there were moving targets and various types of materials to cut through which would replicate armor worn by an enemy.

The lack of engagement against another swordsman was the unrealistic aspect of the course.”

If you had to do it all over again…what would you do differently?

“I would chose a more chopping type weapon as those seem to do very well throughout the many episodes of the show.”

Congratulations on a good showing John!