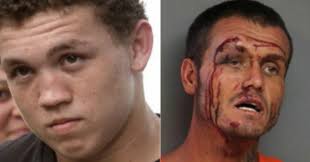 In this corner (on the left) 17 year-old hero Nate Stewart and in the other corner, a 32 year-old waste of life…

Investigators say Luther Dunn, 32, approached Nate Stewart, 17, Friday while he was alone in his mom’s car outside the Sunoco on U.S. 92 East near Lakeland.

Deputies say Dunn demanded money from the teen at knife point. The teen then ran inside the gas station, where his mom works, and when he came back out Dunn approached again.

According to a police report, Stewart opened the trunk of his mom’s car and grabbed a tire iron, beating Dunn into submission and body-slamming him to the ground.

“Nate picked him up, flipped him upside down and dropped him on his head. I thought he broke his neck,” said Kim Stewart.

Nate Stewart told FOX 13 he did what he had to do.

“I am very proud of him. I didn’t realize he was that strong though,” said Kim Stewart.

Dunn was arrested after the incident and faces charges for attempted armed robbery. Deputies say Dunn is a seven-time convicted felon. He was assigned a $40,000 bond.

No training – just the will to improvise and kick ass

He didn’t use an eskrima stick or a retractable baton…HE USED A TIRE IRON than can be found in every vehicle on the planet.

For those of you with the SDTS Elite Program, look at Module 9 and Module 11 for how to use a tire iron (Yep, I cover that too).

If we had more people like Nick, how much better would this world be!